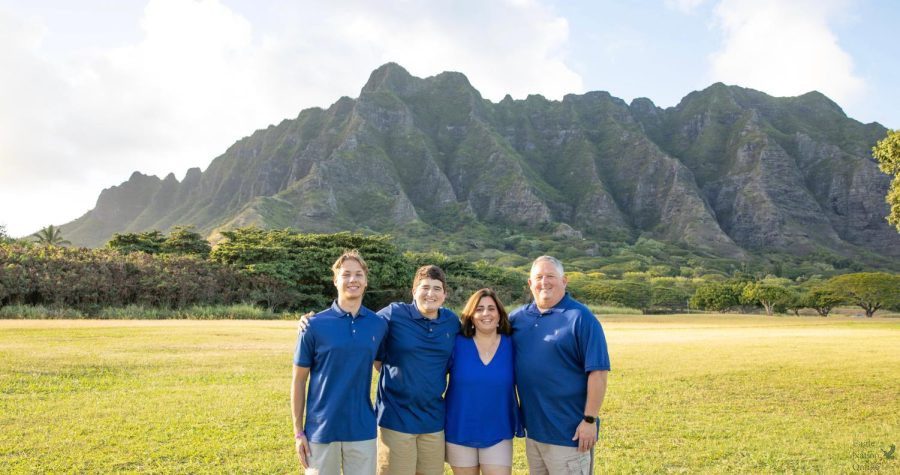 As he creates new memories, sophomore Konstanstin von Friesen huddles up with his host family, the Bach’s. Von Friesen has been staying with the Bach family for the past school year. “Living with my host family is just crazy. Because, I have two families, and 99% of people can’t say that of themselves,” von Friesen said. “It’s just special, being part of two families. They will forever be in my heart – I really appreciate them, and it just makes you appreciate both families. It makes you see how great that is about family in Germany and a family in America.”

Konstantin von Friesen prepares to go home as his journey in U.S. ends

This article is a follow-up to a feature article by Gabriella Winans that published on Nov. 2.

On June 1, sophomore Konstantin von Friesen will catch a plane back to his hometown of Hamburg, Germany – 5,019 miles away.

This year, von Friesen completed his first exchange year. He took part on the football team and experienced all of the up-and-down moments of the season with his teammates.

“I had a hard time deciding which one (game) was better. Beating Allen is one of them,” von Friesen said. “That was just an incredible experience. Being on the field was just awesome. Seeing the people that happy just showed me how important that was for Prosper.”

According to von Friesen, being a part of the team contributed to his experience.

“It was just awesome because I have a lot of football friends – because I was in football.” von Friesen said. “Plus, fun fact, one of the players actually had socks on with my face on them. Don’t ask me why he had them, but he just had them on. I guess it brought luck.”

Another memorable moment Von Friesen described was “Meet the Eagles.”

“The other moment is me crowd surfing at the Meet the Eagles,” von Friesen said. “You know, I watched the fireworks with my team, and then I actually went crowd surfing, and, I don’t know about anybody else, but I don’t go crowd surfing that much. So, that was pretty cool. It was also kind of like a milestone of my high school experience, because it’s pretty fun.”

However, these experiences didn’t come without challenges.

“First football practice, it was way too early for me, and I was new and didn’t know how to play football and what the positions were,” von Friesen said. “I just knew that I wanted to make some new friends. I came here, and everybody was super interested in what I do, and how I came here and lots of cool things, which I appreciate, and everybody just took care of me because they knew I was new and didn’t know a lot of stuff. So, I will always carry that in my heart. I will always appreciate everybody who helped me on my way here.”

Currently, von Friesen is staying with his host family, the Bach family.

“Family and friends is something that you learn to appreciate over time,” von Friesen said. “Honestly, I appreciate everybody in my life in Germany, but, you know, being away from them for a long time just shows you how good people are – how good the people are to me, so I really, really appreciate them. I miss them, and I’m really looking forward to meeting them in two weeks and just enjoying the time with them.”

Von Friesen said he will forever keep his host family in his heart.

“Living with my host family is just crazy. Because, I have two families, and 99% of people can’t say that of themselves,” von Friesen said. “It’s just special, being part of two families. They will forever be in my heart – I really appreciate them, and it just makes you appreciate both families. It makes you see how great that is about family in Germany and a family in America.”

Von Friesen said he hopes to return to America in the future to experience prom with his friends.

“My dream would be to come back and maybe experience prom,” von Friesen said. “I didn’t do prom this year – which was fine, but I kind of want to come back and do prom with one of my friends. So, we will see how that goes next year, but that could be a pretty fun thing to do.” 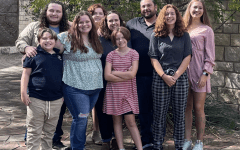 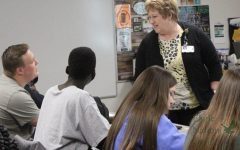 Teacher's love for helping others has been the 'biggest reward'

“One of my favorite classes was probably med-term. I just love my teacher, Mrs. Thomas – shout out,” von Friesen said. “She’s just great and she cares about everybody, and she’s just trying to show everybody how to do things right. Another class is with Coach Richards. I had him in football as a coach and banking and financing. You know, you learn a thing or two for life. Plus, he’s just a cool dude. He’s a cool coach – probably one of my favorite coaches.”

Von Friesen said one of his favorite things about America is fast food.

“One thing – call me crazy for this, but one thing – is definitely fast food. Like, we don’t have that much fast food. I’ve never seen a Chick-Fil-A in Germany,” von Friesen said. “Jersey Mikes for example – I went there a lot, and people say there are more special things, and there probably is, but, just for me, fast food is crazy because I really enjoyed it – especially after football games or baseball games. Say, you want to get some food there. It’s just a good place to connect.”

Sports being connected to the school was another one of von Friesen’s favorite parts of Texas.

“I love how sports is connected to school, because in Germany it’s not,” von Friesen said. “It’s really cool if someone asks you, ‘Hey, do you want to go to the baseball game, later?’ ‘You want to go to the volleyball game later.’ And, that just brings people together.”

Von Friesen described Prosper as an experience he would consider repeating.

“I would also do it in Prosper again,” von Friesen said. “I think Prosper was a great place. I had a lot of opportunities. I got to play football, in a pretty big stadium, too. That was super cool. I had the opportunity to watch baseball, so just stuff like that. It’s not normal, and I can’t even recognize that yet, how crazy this year was, and how lucky I am.”