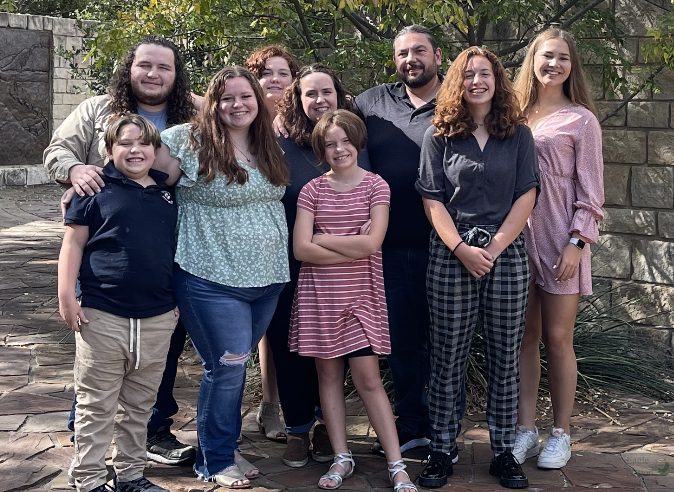 With her American host family, the Oyakawa’s, junior Ayana Breternitz stands on the far right for a family picture. Breternitz began staying with her host family only a week before school started, around the week of Aug. 4. “In the beginning, like the first two weeks of school, I was really excited to go back,” Breternitz said. “Now, it’s pretty good. I feel comfortable here. My host family makes me feel like I am a real part of their family.”

2 German exchange students share about their journeys to U.S.

As she steps off of the plane in an entirely different country, the first thing junior Ayana Breternitz notices is the stars.

“When I was coming back from the airport, everything was different,” Breternitz said. “But, I especially noticed the sky and the stars. It’s all bigger. Clearer.”

After living her entire life in Düsseldorf, Germany, Breternitz made the decision to come to the United States as a foreign exchange student, making it to Prosper only one week before school started.

“Even though it’s only for a year, my mom had always said it would be a really good opportunity to come here,” Breternitz said. “So, we started researching about exchange years, and then I got here. I really like America, I had always wanted to go.”

“We did mini-activities with it in elementary school, but I didn’t get a lot of experience speaking it until fifth grade,” Breternitz said. “But, we spent the same amount of time learning our mother language and English, so it wasn’t that hard.”

Breternitz attended Albert Einstein Gymnasium, a school with about 900 students in grades five through 13 in Bochum, Germany, before beginning her exchange year.

“The schedules are different here, since they’re ‘A’ and ‘B’ days, but we have week schedules in Germany,” Breternitz said. “Our school didn’t have any sports in general, either. All sports were outside of school, as well as afternoon activities. The tests and quizzes were different, too. We have less tests, but the tests are bigger, and they’re sometimes harder. I would say school’s easier in America than in Germany.”

As a soccer player, Breternitz said having school sports “be big” in the U.S. has “helped a lot.”

“The way they play (here) is different. It’s faster,” Breternitz said. “They are playing more forward, so I have to have acceleration to break it up and to play again. But, I’m just glad to be playing.”

Breternitz plays on the varsity girl’s soccer team — which she tried out for, and ended up making.

“I was kind of worried at the try-outs,” Breternitz said. “There were a lot of girls, over 40 people I would say, and they were good. And I was like, okay, and I actually wanted to go to varsity, and if JV was already so good, how would varsity be? But, I tried my best, and ended up making it on the team.”

After formerly playing soccer in Germany, Breternitz said she still communicates with old friends and teammates.

“With the time difference it’s hard to talk to them, so I talk to them usually on the weekends,” Breternitz said. “But sometimes it’s every three or so weeks.”

However, Breternitz has also found friendship on her new team.

“Ayana is so fun to be around, and being on the same team as her has been so fun,” varsity soccer player and junior Anna Owen said. “Especially because she is always there to pick me up when I get down. She is very encouraging, and I love that about her.”

In a new country and new environment, Breternitz said moving was a “nerve-wracking” transition.

“I actually didn’t know anything about here when I first came, so I had to do a lot of research,” Breternitz said. “The buildings are cool, the school is awesome, the high school is looking nothing like Germany. But, of course, I was nervous, because I (didn’t) know anybody. I didn’t know the roads. I didn’t know my way home and then back to school.”

Breternitz said it was “scary in the beginning,” but now she feels “more comfortable.”

“Now, I’m finding more friends, more closer friends, and it’s getting better. I’m liking my time here,” Breternitz said. “So, in the beginning, like the first two weeks of school, I was really excited to go back (to Germany). Now, it’s pretty good. I feel comfortable here.”

Now living with her host family, the Oyakawa family, Breternitz said they have made her “felt at home.”

“Ayana is always really uplifting, and always makes us laugh even when she feels out of place or homesick,” Maiya Oyakawa, Breternitz’ host sister, said. “Hosting Ayana has been one of the best times of my life, as it really is like getting a new sister who is my age, which is what I’ve always wanted, with a very different background from me and hilarious stories. Although we met as strangers, and it was quite awkward, Ayana has become one of the best people in my family and I’s life.”

Being nearly 5,000 miles away from Germany, Breternitz said she has found it “somewhat hard” being without her family, but has found support through her host family.

“I’m really excited to see them (my family) again,” Breternitz said. “It’s kind of hard living without my parents. Sometimes, I’m missing talking in-person to them, and getting a hug from them, and just like that ‘family feeling.’ But, I’ve got a really, really good host family, so they are making me feel like a part of their family. They include me to everything, and it’s really good.”

Twelve hours by plane. 5,019 miles. For sophomore Konstantin von Friesen, moving from his home in Hamburg, Germany, to Prosper, Texas, was the biggest step of his life.

“We’re all on the same planet, but there is a whole lot of differences,” von Friesen said. “I would say that the biggest one is culture. So, I wanted to get to know that.”

After living in Germany his entire life, von Friesen made the decision to come to the United States as a part of the foreign exchange program.

“It teaches you to be on your own,” von Friesen said. “Because, you have rules, and you have parents that say, ‘Hey, don’t do that,’ or, ‘Okay, you’re allowed to do that.’ But, here, you are on your own. Here, you have got to realize that some situations may be fine, or which situations you should maybe stay out of.”

Growing up, von Friesen learned English from a young age.

“Maybe Americans don’t think of it this way, but, for everyone else, English is a skill you have to learn,” von Friesen said. “That’s another difference.”

For von Friesen, the biggest “shock” coming to the U.S. was the size difference.

“You hear, ‘Everything’s bigger in Texas,’ but, I’m from Germany, and Germany’s small,” von Friesen said. “Texas is actually a lot bigger than Germany, so, when I first came in the school, I would say it alone is five times bigger, six times bigger, than any other school I’ve seen in Germany. The food here is also crazy. I’ve never seen that much food, that much awesome food. So, yeah, I would say the size of everything is just shocking.”

With school sports and activities being “well-known” in the U.S., von Friesen said he would “love” to carry this spirit back to Germany with him.

Though he is a sophomore, von Friesen has been permitted to go to prom in May, due to his only staying in the U.S. for an exchange year.

“I only have this opportunity, so they’re letting me go,” von Friesen said. “And, I’m excited about that because there are many good things about prom.”

Though in a new environment, von Friesen said the one thing he has found “most beneficial” has been his host family, the Bach family.

“I would say a benefit is definitely the family I have here,” von Friesen said. “Because they will be my second family forever. I will stay with them for a whole year. So, I will never forget them, and I think that’s a special thing, having two families that you really love.”