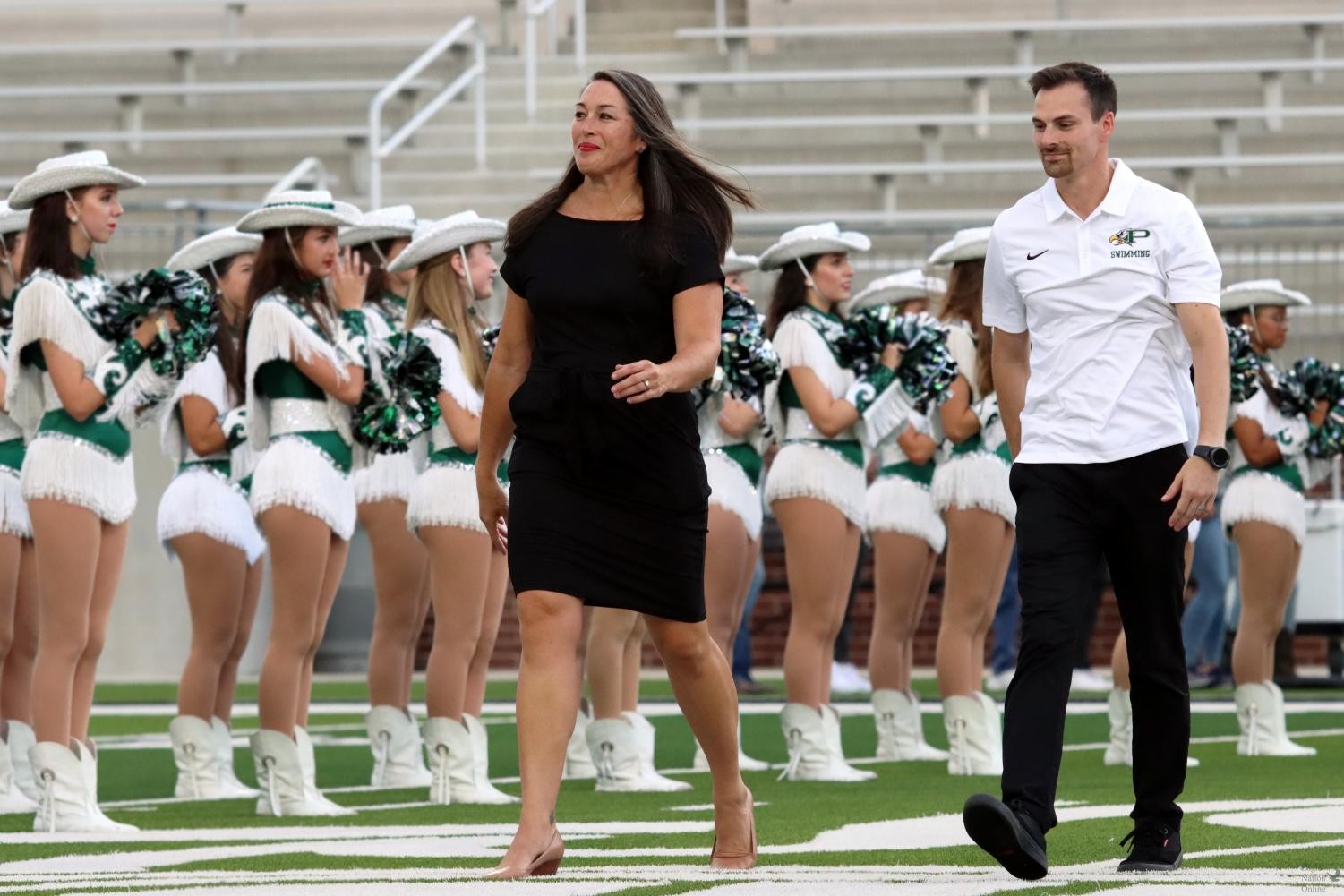 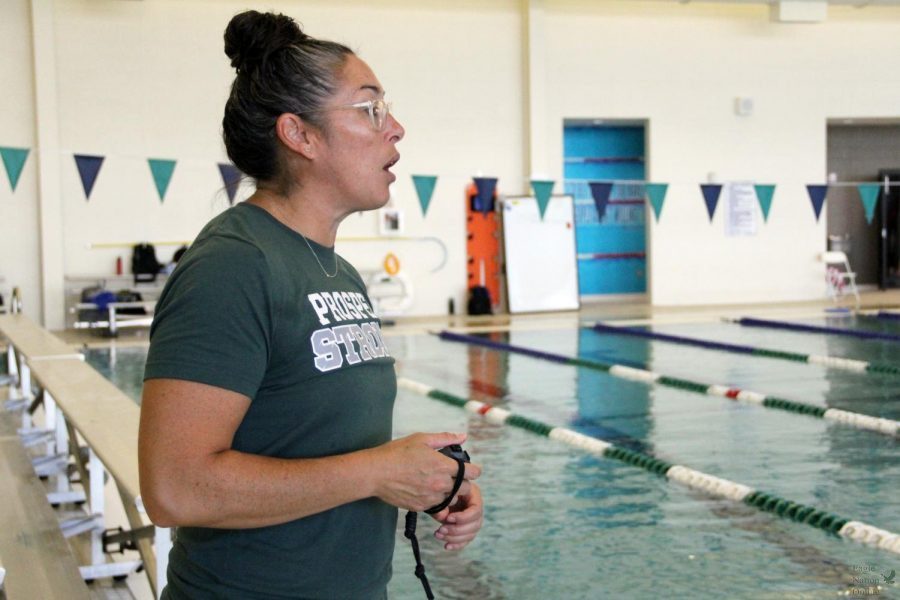 Timer in hand, head swim coach Lena Harrington gives directions to swimmers in the pool before their timed practice. This is Harrington’s first year at Prosper leaving Plano ISD after nine years. “I sat and got to speak with Coach Little, Coach Schmidt and Coach Sacco, all the coaches,” Harrington said. “It just felt like home.”

Horns blare, signaling the start of the meet. Swimmers dive off their blocks with a splash, and the pool turns white as competitors make their way down their lanes.

Head swim coach Lena Harrington stands on the edge of the pool, staying calm as her swimmers maintain a steady pace throughout the race. When the meet ends, and her swimmers come out on top, Harrington’s calm facade fades, and she erupts with excitement, smiling and cheering for her athletes’ success.

Harrington has coached swim for the past 19 years, but she made the transition to Prosper this year after spending the last nine years in Plano ISD. She said she has “loved” the sport since she began competing at age 13.

“I sat and got to speak with Coach Little, Coach Schmidt and Coach Sacco, all the coaches,” Harrington said. “It just felt like home. It just felt like this is the kind of place where I will be a part of a family, and families support each other. That was the biggest win. And, about 48 hours later, I was filling out an application and getting ready to change colors.””

“When I turned 10, there was a synchronized swimming group in the area, and I just thought it was the coolest thing ever,” Harrington said. “I started that, and I did that for a couple of years, but it ended up being too much of a financial burden for a family with four kids. Soon after, I started to put on a little bit of weight, and my mom was like, ‘You need to get back on a team.’ So, she put me in competitive swimming, and that’s kind of where it started.”

Though she continued to swim through high school and middle school competitively, Harrington said she didn’t truly feel like a part of a team until college.

“When I got to college, it was the first time I had ever been on a team of just women, which was really cool,” Harrington said. “Everybody relied on everybody else, from the weight room to training to meets. Every person counted. You didn’t have to be the fastest. Every point counted. Especially when meets were close, and when you add the relays and the emphasis of the point differences between relays and different events, it got really competitive. It was just a lot of fun.”

While in college, Harrington said she had no intention of going into coaching, but said her mindset changed when she began to coach her fellow teammates after practices. This would soon help her transition into her first coaching position.

“After college, I started coaching for Clovis Swim Club, and I just really loved it,” Harrington said. “Then, I was like, ‘I want to do for other girls what my coach did for me,’ and that was just to provide an opportunity. And so, I went right into college coaching when I was 23.”

“After (Hurricane) Katrina, I had lost my job because of sports cuts, and so I came back to Texas, and I coached at Keller High School for two years,” Harrington said. “Then, Tulane reinstated their swimming program, and I came back and coached there for four years as the head coach.”

After her time at Tulane, Harrington returned to Texas, as her daughters grew old enough to attend school. She got a job at Plano West High School, where she coached for two years, before coaching at Plano East High School for seven years. Nearing the end of her ninth year in Plano, Prosper High School opened its applications for a new head swim coach, which Harrington said “piqued her interest.”

“I had seen the job posted, and I hadn’t thought much about it other than it’s really far away. It’s about a 45-minute drive for me from home,” Harrington said. “I had a conversation with Coach Sacco (the PISD Natatorium Director), and he had so many great things to say, and I was like ‘I want to ask more questions, I want to talk to more people,’ and so, he set up an interview for me.”

Though the interview she had wasn’t a job interview, Harrington said it still provided an opportunity to get to know her potential colleagues, to see if she felt like Prosper would be a good fit.

“I sat and got to speak with Coach Little, Coach Schmidt and Coach Sacco, all the coaches,” Harrington said. “It just felt like home. It just felt like this is the kind of place where I will be a part of a family, and families support each other. That was the biggest win. And, about 48 hours later, I was filling out an application and getting ready to change colors.”

As Prosper’s new head swim coach, Harrington wants to win, and she plans to lead her team not only toward achievements in the pool, but also to personal success.

Being the third head coach of the team in three years, Harrington said she wants to focus on creating a positive environment for her swimmers by creating an established team culture.

“There were a lot of ‘schisms’ in the team last year and in previous years,” assistant swim coach Keenan Fogelberg said. “Her main focus these first couple weeks have been really building a team culture, but then also a positive attitude, work attitude, work ethic and that really good culture.”

For Harrington, she said the change to Prosper has been a “refreshing” new experience.

“I leave the pool smiling every day,” Harrington said. “But, there’s not a part of this job that I don’t like. I love being on campus, that’s a new thing for me. When I was in Plano, I was never on campus. I love how everybody seems to really love just being here. The happiness is contagious, it’s been a lot of fun. It’s great to work with people who love to be at work.”

As she looks to future swim meets, Harrington said she hopes to instill “the best experiences” in her athletes.

“For each athlete, I want this to be their best athletic experience,” Harrington said. “Most athletes won’t go on to swim college. This is it for them. And I want them to look back on their experience on the Prosper High School swimming team and say, ‘Those were some of the best experiences of my life.’”

Will you attend the first swim meet on Sept. 15? 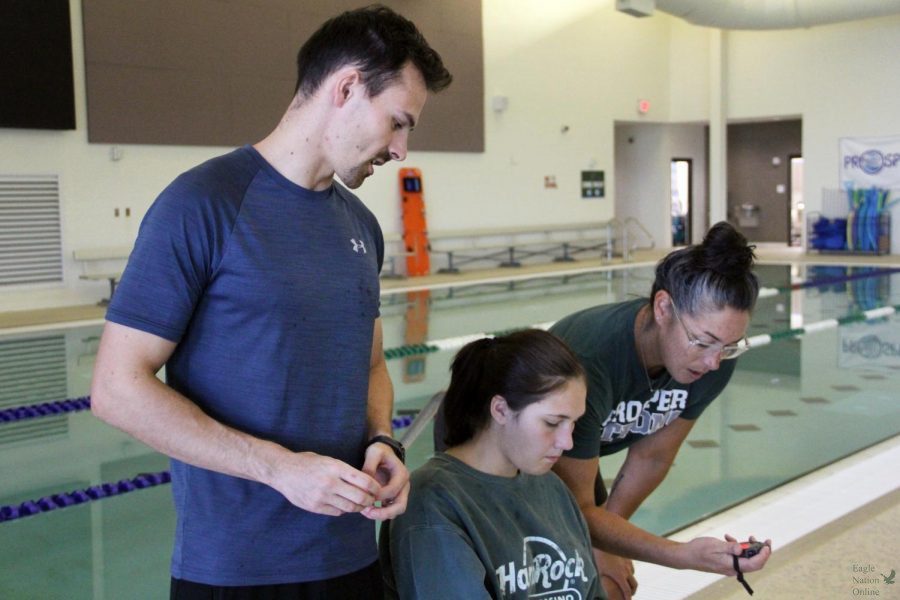 Helping his athletes log their lap time, assistant swim and dive coach Keenan Fogelberg gives advice. This is Fogelberg’s first year coaching at Prosper. “Before this I was in Dallas and before that I was in Orem, Utah,” Fogelberg said. “Yes I have coached football before officially and I unofficially helped out freshman soccer as well.”

Growing up a swimmer and a water polo player, Fogelberg began his coaching career in 2016, starting in Orem, Utah, before transferring to Dallas. Now, Fogelberg has started his first year coaching swim and dive in Prosper.

He’s very motivating and tries to get us to always do our max when we’re working out or diving. No matter what skills we’re doing and even though he doesn’t know everything about dive he’s always just trying to get us to be better. ”

Since swim and dive is a sport where people compete individually, Fogelberg said it can be “difficult” to navigate, seeing as it’s not as much of a team environment as other teams.

“Swimming is an interesting sport, in that it’s an individual sport and a team sport at the same time,” Fogelberg said. “It’s awesome because we can pick up a lot of kids, as opposed to you know, basketball. There’s only so many spots on the court and on the bench. But, we can have lots of swimmers, and so there are challenges as far as making kids feel part of a group.”

Fogelberg said he faces this challenge by having the athletes practice with new people, and talking to them about team culture both before and after practice.

“I don’t know if I could coach and teach for 40 years like some people do,” Fogelberg said. “But, when I think about something else I would do, I don’t think of anything. I’ve coached other things, and I like other sports, but it’s a huge time commitment, and to spend that amount of time coaching something that you’re not fully in love with is very difficult.”

Although he has only been coaching for five years, Fogelberg has experienced different circumstances from coaching a different sport, to coaching during a pandemic.

“It’s my hope to start coaching water polo,” Fogelberg said. “Right now, it’s a club team that I’m coaching. Next year, it goes full UIL, and I hope to continue coaching that. But, that’s kind of still all in the same aquatic realm. As far as outside of the pool, I don’t really have any intention of leaving the pool deck.”

Fogelberg said he has high hopes for the next season and is excited to work with our talented athletes.

“It’s awesome that we have really nice, brand-new, expensive facilities,” Fogelberg said. “Which I mean isn’t everything, but is really nice and helps. We have administration who supports us and cares about what we’re doing and a new head coach who really knows her stuff. I think we’re going to have a lot of success.”

Have you ever been to a dive meet?