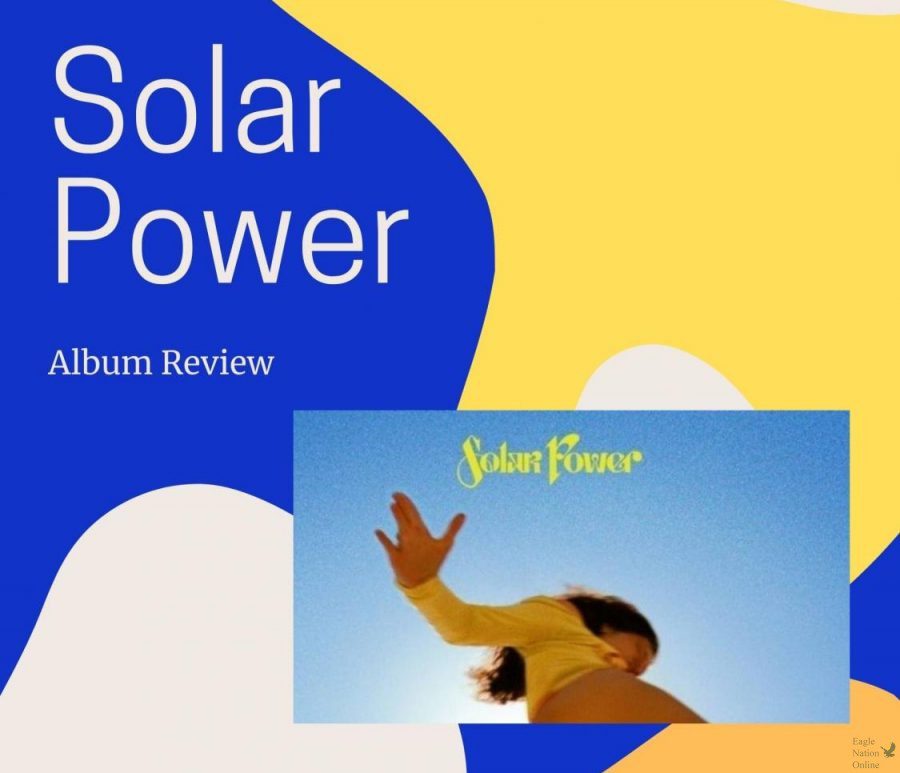 With the release of her third album ‘Solar Power,’ Lorde produced 12 different tracks, three of them were released prior to the album. Some key themes mentioned in the album include nature, fame and loss. “Lorde’s bright voice fits in so well with the relaxing, soothing chords featured in each song,” reviewer and senior Alyssa Clark said. “This album was a new sound for Lorde, but she faults in the repetitiveness of each song.”

New Zealand singer-songwriter Ella Marija Lani Yelich-O’Connor, known better as Lorde, continues to rise in the charts with the release of her third album ‘Solar Power.’ Released on Aug. 20, the album highlights light melodies created and produced by Lorde and Jack Antonoff, as the singer touches on all topics under the sun. Lorde’s bright voice fits in so well with the relaxing, soothing chords featured in each song. This album was a new sound for Lorde, but she faults in the repetitiveness of each song.

From the effects of climate change on the earth, to how her rise to fame has changed her entire life, Lorde doesn’t leave any aspect of her life out on her new album. Lorde will start her ‘Solar Power’ international world tour on Feb. 26, 2022, in New Zealand, and will tour in the U.S. on April 3, 2022. In an effort to reduce her waste and decrease her effect on the environment for merchandise, Lorde is releasing a Music Box, which a special alternative to a CD.

“I realized I had no idea where my merch’s cotton came from, for example, or who was stitching it, or if it was new or recycled … and once I started digging into (details) like that, I couldn’t go back,” Lorde said in an interview with Billboard. “I couldn’t in good conscience ask my supporters to buy T-shirts without knowing I’d done everything I could to make them a little better for the environment. And, I made this personal, private commitment to never waste any food, and (now) I really don’t, I have a compost and I eat everything that I buy.”

Lorde wrote on her Spotify page that she wrote most of the chords in the song when sitting in the New Zealand sun, and you can almost feel that peaceful radiance. The start of the song has a very strong fairy-tail theme, that creates a very warm and comforting vibe when combined with her angelic sounding voice. She then adds more drive to the song by adding in the drums and speeding up the beating, creating a rhythm that gets the listener to start moving with the song. The smooth transition into the end of the song goes from a melodic opening to a funky, 70s pop song.

The first single released off the album on July 11, ‘Solar Power,’ features backing vocals from stars Phoebe Bridgers and Clairo. The song, featuring many lyrics surrounding nature and summer, highlights a catchy chorus. Some fans have heard religious references within the song, including Lorde singing “Lead the boys and girls onto the beaches / Come one, come all, I’ll tell you my secrets / I’m kinda like a prettier Jesus.” This correlation comes as a reference to climate change and how that connects to religion, which we’ve seen before from Billie Eilish’s song ‘All the Good Girls Go to H***.’ Traces of George Michael’s ‘Freedom! ’90’ is also a nice touch that takes many listens to clearly identify.

Coming from the upbeat ‘Solar Power,’ ‘California’ gives off a new vibe with soft melodies. It provides a unique perspective on how a famous celebrity views the world she lives in, almost sounding as if she wishes she wasn’t apart of it, with lyrics including “It’s all just a dream / I wanna wake up, I wanna wake up.” The overall beat she created for the song is very relaxed and so simple to the point that it could be considered lo-fi music if the words were to be deleted from the track. This song is perfect for just background noise while doing house chores or everyday tasks.

Stoned at the Nail Salon

sound makes up for faults – alyssa

One of the more melancholy songs, ‘Stoned at the Nail Salon,’ dropped on July 21 as the second single to drop before the album. Lorde focuses on the passing of time, and reflects on her life as she, supposedly, ponders and wonders “Maybe I’m just stoned at the nail salon again.” The song is really beautiful, but it takes a few listens to really appreciate it. The repetition of some of the lyrics can get boring, but the overall message and sound make up for it.

‘Fallen Fruit’ has a new sound for Lorde. The acoustic guitar is rarely in any of Lorde’s music, but this time it created a relaxed ambiance in the song. The sudden pause half-way through the song catches the attention of listeners, but continues on the same tone from before. The song starts off slowly, with her words drawn out, making it easier for the listener to sing along in combination with the simple and repetitive lyrics.  This song is on the slower side, which makes it a solid choice when wanting to set the mood.

Secrets From a Girl (Who’s Seen it All)

use a skip – alyssa

This song is a more upbeat version of the previous song. ‘Secrets From a Girl (Who’s Seen it All)’ is definitely different than all the other songs on this album, even including an interesting voice-over that sounds like she’s directing people at an airport. Personally, this song wasn’t that notable to me, especially after listening to ‘Fallen Fruit,’ which really enjoyed. If you are listening to the album in order, the transition from ‘Fallen Fruit’ to ‘Secrets From a Girl (Who’s Seen it All)’ takes the listener by surprise just because of how different the rhythms of the two songs are.

This album created a whole new sound for Lorde, and I’m loving it. While ‘Mood Ring’ and ‘Solar Power’ are my expected favorites from the album, I also really fell in love with ‘Big Star.’ These songs are so unique compared to the music that Lorde created in 2016, and it’s refreshing to see the difference. While I wish there were more stylistic changes between each song, I overall still really enjoyed this album.”

The Man With the Axe

This song feels like ‘Feeling Whitney’ by Post Malone. It has a very slow beat, but creates a powerful tune when listening to the words, and is definitely one of those must-haves in a crying playlist type of songs. The use of guitar and her voice makes the song feel simple but also heartfelt at the same time. Nearing the end of the song, there is a rippling sound that was a change of pace to re-engage the listener.

one of my favorites – michael

‘Dominoes’ is a very relaxed song, and it heavily uses ukulele, making it a very easy beat to follow.

This song continues to use the same slow beat as much of the rest of her album does. Along with the power of the guitar match, Lorde’s voice in the song shares some of the same characteristics of the previous songs by being slow and easy to follow along, but it also is powerful when listening to the words. With that being said, the song is very hard to fully get through, just because it feels like I have been listening to the same song but different variants of it. This song was written for Lorde’s late dog, Pearl, who died earlier this year.

Leader of a New Regime

more of the same – michael

The first few words were an amazing change of pace, and give the song a new appeal in the first few seconds. However, after the verse is over, the song reverts back into the same melancholiness as the previous songs, with a slow melody and a slow voice to draw out emotion.

Personally, I think that this album is okay. I think I enjoyed listening to it most while just driving at night and relaxing in my room. However, the album felt incredibly repetitive, and I found it getting even harder to finish each song with the exception of ‘Mood Ring,’ ‘Man With an Axe’ and ‘Dominoes.’ These songs spoke differently to me, and really kept my attention while also not making me sigh in disbelief that the song sounded similar to the previous one.”

‘Mood Ring,’ released Aug. 17, and came out as the third, and last single, before the album was dropped. Lorde has announced that the video is satire, and meant to show how the average white woman appropriates spiritual practices from indigenous groups. In the song, she sings “Ladies, begin your sun salutations / Pluto in Scorpio generation / You can burn sage, and I’ll cleanse the crystals / We can get high, but only if the wind blows.” The chorus sounds like a catchy 2000s pop song, and takes an acoustic melody with the combination of her voice, making the feeling of it very upbeat. When the melody meets her singing style, a very complex song is created, that starts out slow, such as a campfire song, and slowly increases its drive While these lyrics are on the simpler side, it makes it easier for the listener to sing along.

The song starts off slowly, which helps to build up suspense. Then, the song starts to gain drive with each instrument that is involved. The song then goes through high and low moments that leave the listener wanting to know which will be next. Her voice tends to echo a little bit, creating a very euphoric feeling while using ad-libs to fill in the gaps.