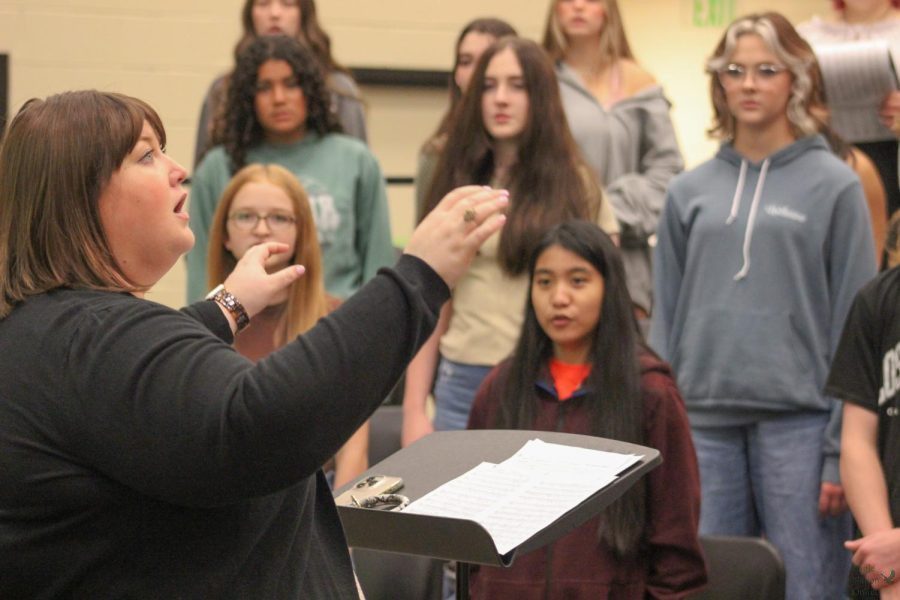 Standing before a roomful of students, director Crystal Chamberlain guides the varsity mixed choir through a musical piece. This year will be Chamberlain’s sixth at PHS and her third as the choir director. “This year, our program is growing,” Chamberlain said. “And, so we really want to showcase the students, and make sure everyone knows how amazing they are and can be a part of what we’re doing.”

The large classroom sits, filled with quiet. A piano claims space at the opposite side of the entry. Forty-three students come in and take their places on risers in the center. Then, they wait for words from their leader.

“Yes…,” the students answer in a drawn-out, loud, but in-sync, reply.

In moments, Chamberlain takes her place at the piano’s keyboard, and harmonic voices fill the room.

Chamberlain knew that singing would be her lifetime passion – even in high school. This year marks her sixth here in Prosper and her third as the choir director. In college, she graduated with an undergraduate degree in music and music education from Dallas Baptist University. The choir, under her direction, is preparing for the Oct. 4 fall concert, and some students are preparing for auditions for the All-Region and All-State choirs. The first auditions happen today, Sept. 27. Chamberlain took other various jobs before she came to this school district.

“My first ever job was as a funeral singer,” Chamberlain said. “I had done other little jobs before, but it was my first job that I got, like, a paycheck for. I would always ask to go before the eulogy, though, because I was like, ‘I don’t want to cry.’ I didn’t want to cry, because then I couldn’t sing.”

Chamberlain said teaching was the right fit for her, career-wise.

“I always knew I wanted to be a teacher,” Chamberlain said. “I had some really amazing choir directors along the way that made me feel like this would be the best arena for me to teach. So I got really excited about teaching – and wanted to do something fun.”

Chamberlain said her students bring ongoing inspiration to her program.

“I want to be better for them,” Chamberlain said. “And, because they have so many amazing talents, I want to push them in the direction that they need to go – and make sure I’m doing all I can to get them where they need to be.”

One of her greatest professional accomplishments included her choir being selected to perform at a state convention.

“It’s a really big deal,” Chamberlain said. “And it made me really, really proud of them. But it’s also things like when we perform at a homecoming game, and it goes really well. And everyone can hear how great they are, or at a really awesome concert. Those are also pretty fun achievements as well, simple things.”

Chamberlain said concerts create some of her favorite moments as a teacher.

“When I’m conducting a concert, it all comes together, you know,” Chamberlain said. “Everyone is there, and we’re in the moment together. As a group, we are so connected and, like, we’re breathing together. We’re feeling the song together. That’s really fun.”

While Chamberlain said she rarely faces challenges, she relies on her own confidence when she does.

“Sometimes I can see the bigger picture,” Chamberlain said. “And, the students can’t. So, I am trying to encourage them to do something that might be outside of their comfort zone. It’s about encouraging people that it’s okay to fail. But, you might not fail, and it might be really a great thing.”

“The thing I like about Ms. Chamberlain is that she wants me to try my best, and she knows that I could push myself even though I think I can’t,” Nafziger said. “I’m surrounded with people who also have the same talent I have, and they make it fun.”

“Ms. Chamberlain is an amazing director,” Tan said. “She works hard to make sure everybody is included in the choir, and (that) we all work hard, and we are the best singers we can possibly be.”

“I mean, we have been working together for a little over three years now,” Keen said. “It’s been great. If you consider the times that we’ve had to go through, and the things we’ve had to adjust with, and how she’s led us through all of that, it’s incredible. It’s been great getting to work with her. She’s really been a mentor for me – to me – to be a better teacher.

Chamberlain said she’s excited about the choir’s growth this year. Last year the choir program had 95 students. For 2022-23, it has 125.

“This year, our program is growing,” Chamberlain said. “And, so we really want to showcase the students and make sure everyone knows how amazing they are and can be a part of what we’re doing. As a choir program, we really want to focus on the connection we have with each other – and continuing to get better as a group.”