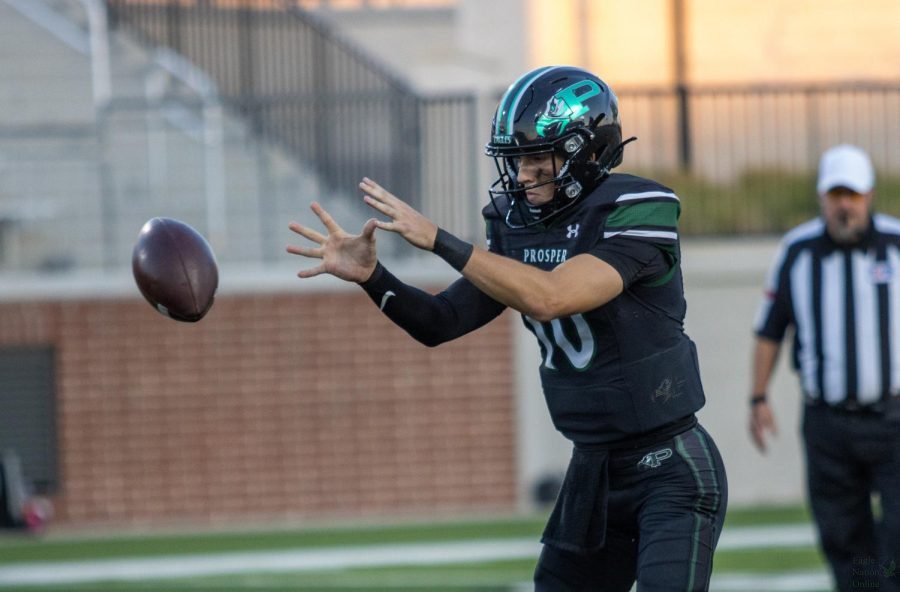 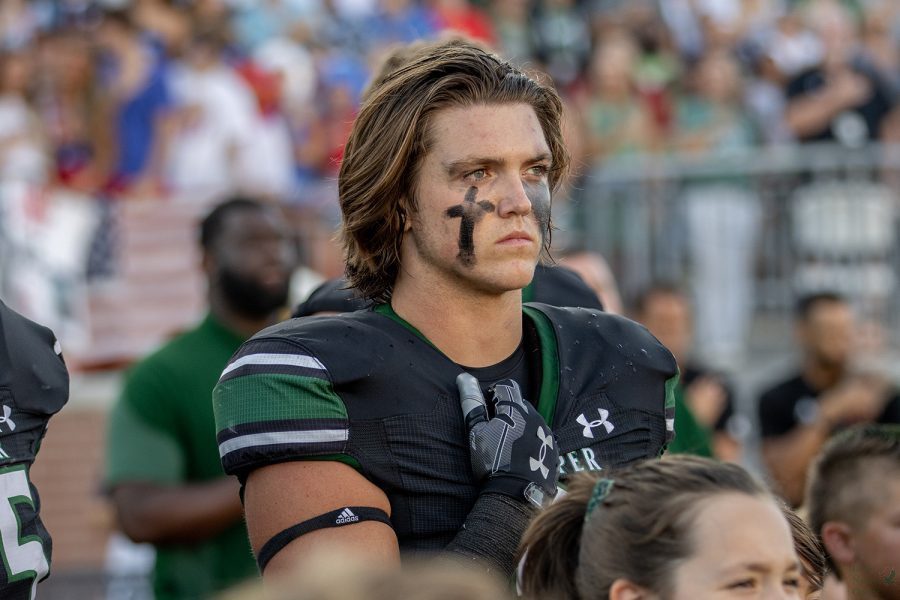 Gallery|14 Photos
Riley McConnell
Focused, junior Luke Johnson stands during the national anthem. He plays on the defensive line, which coach Devin Lemons leads. "We kept our heads up," Johnson said. "We brushed any setbacks off our shoulders and did our job."

Click the photo above to start an entire slideshow with captions full of information about the varsity football game on Friday, Sept. 9, against the Rockwall High School Yellowjackets.

The Prosper Varsity Football team took the field 7 p.m. Friday, Sept. 9, at Children’s Health Stadium at Prosper ISD against the Rockwall Yellowjackets. The Eagles won this non-district game, which was also the first home game of the stadium. This event also featured “Elementary Night,” which allowed those students to run out with the players before the game. With the electric feel in the stadium and a No. 8-ranked opponent, some key players contributed to the team’s success.

This team’s got a lot of heart. You know, we got good leadership. They enjoy playing football, they enjoy being around each other. You know really tonight was just a tough, gritty, just hard-earned win.”

Senior wide receiver and cornerback Hunter Summers contributed to the team’s success, scoring two touchdowns in the first half. His ability to play both sides of the ball also helped the defense. Senior quarterback Harrison Rosar was able to connect with Summers and senior tight end Dylan Hinshaw on these multiple occasions, allowing the Eagles to keep a lead in the second half – and win the game.

Senior middle linebacker Ethan Higgins and junior outside linebacker Jonah McClendon both had tackles throughout the game that stopped the Yellowjackets from gaining yards. This was Higgins’s first game back from an elbow injury where he was able to prove his ability.

Senior wide receiver and kicker Josh Kennedy completed a point-after attempt after one out of two touchdowns. He also kicked a field goal to raise the score to 19-3 in the first half.

The team leaves all three non-district games undefeated, which presents a different look than last year when the team left non-district 3-1. The Eagles face off Friday, Sept. 16, at C.H. Collins Athletic Complex at 7 p.m. against the Denton Guyer Wildcats.

Both teams are going into next week 3-0, with both showing a stretch of momentum. In seasons past, the Eagles and Wildcats have provided a tough matchup. In the last two years, the teams also played during the regular season and again in the playoffs. Last year, Prosper lost 35-7 in the regular season, but they provided a closer game when the Eagles got knocked out of the playoffs, only losing by three points, 25-22.

The rest of the team’s games show in the graphic below. 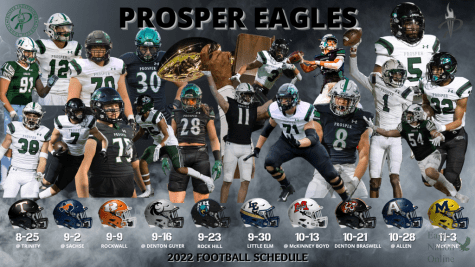 The crowd always loves a good interception! @ProsperEaglesFB takes down Rockwall behind a suffocating defense! We have all the highlights tonight at 5 on NBC5! #txhsfb #ihss pic.twitter.com/yZSXlIscrN