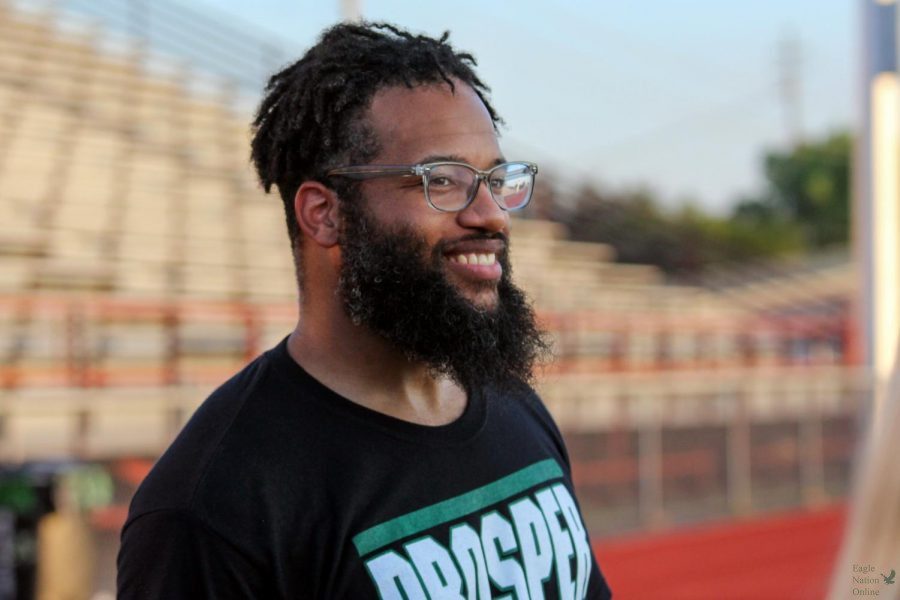 As he prepares for the Friday, Sept. 17, game in Arlington, head cheer coach Cameron Jones watches as Prosper cheerleaders and football players run onto the field. This is Jones’ first year in Prosper. Jones has been involved in cheerleading for more than 20 years.

With a blur of arms and legs, the cheerleaders begin their chants. Voices raise from the crowd as fans add volume. Cameron Jones watches, enveloped by the noise as his cheer squad moves from one routine to the next.

Jones has been in cheerleading as both a team member and a coach for more than 20 years, with this one being his first as head cheer coach. He began his cheerleading career in high school after attending several football games at the Air Force Academy in Colorado Springs, where he lived at the time.

“We would go to football games there all the time,” Jones said. “I would always watch the cheerleaders, and it was the first time I had ever seen guys doing cheerleading. And the way they could hold girls above their head, I thought that it was the absolute coolest thing. So, I was like, ‘I want to do that.'”

After being inspired by other male cheerleaders, Jones began his cheer career in his junior year of high school.

“From high school, I cheered in college at the University of North Texas,” Jones said. “I worked at an All-Star gym. From there, I coached at a high school and then went back into All-Stars.”

Jones said he never planned on becoming a cheer coach, but one of his teammates pushed him to coach at an All-Star gym because she saw his potential as a coach.

“I think she was pushing me to work there because we had taught NCA (National Cheerleader Association) camps together, so she knew I knew how to teach cheerleading,” Jones said. “She was like, ‘You’d be perfect for this,’ and so I said, ‘Why not?’ It was just kind of something I got into, and I enjoyed it and kept doing it.”

The next years in Jones’ career were spent at a variety of competitive cheerleading gyms, but when Jones saw that the district wanted to invest in cheerleading, he said he made the transition to high school coaching easily.

“Getting into a position where they have decided that their cheerleaders, their athletes, their students are worth investing in and bringing in someone whose main responsibility is to coach the cheerleaders, that was very fascinating to me,” Jones said. “Most schools don’t do that. Seeing a school, seeing a district, where they decided that cheerleading is important, and we want to invest in our cheerleaders and make sure they get the best training possible, that sold me.”

According to junior varsity cheer coach Emily Allen, Jones has brought a new perspective to the cheer team, with his combination of both game day and competitive experience.

“He has a background in competitive and game day cheer,” Allen said. “He was a cheerleader, and so he knows game-day style, and he has also coached competitive. So, I feel like we balance each other very well.”

By investing in the cheerleading program, Jones said he believes that it will not only improve the game day experience, but also the school’s overall spirit.

“He’s changed how we present ourselves greatly,” junior and varsity cheerleader Hannah McCurry said. “It’s very important to him how we are viewed by our community, and he always wants us to look our best. He’s always five steps ahead of everyone else in the best way possible. He has a plan, and he will be following through with that plan to ensure we look our best.”

After his years as a cheer coach, Jones said his favorite thing about cheer is the combination of performance and athletics.

Jones said he believes that if he only teaches his cheerleaders how to do their cheers, then he has failed as their coach because his main goal is to help cheerleaders apply the life lessons of hard work and confidence that cheer teaches.

“The most important thing that cheer teaches, I’d probably say, is confidence,” Jones said. “When you actually sit down and think about it, cheer does not make any sense at all. But if you realize that, once you own what you’re doing and realize that this is how a cheerleader is supposed to operate, yeah, it might look silly, but when I own what I’m supposed to be doing, then all the sudden the confidence that I have about it changes. So, now I don’t look silly doing it.”

Jones said he hopes to change the perception of cheerleading to show who cheerleaders really are — serious athletes.

“I want everyone to see how serious we take cheer,” Jones said. “The district isn’t bringing in someone whose main responsibility is to coach cheer if cheer is not to be taken seriously. While yes, it is fun and lighthearted. We put in work. We want to let people know, we’re serious.”

Do you know any of Prosper's cheers?