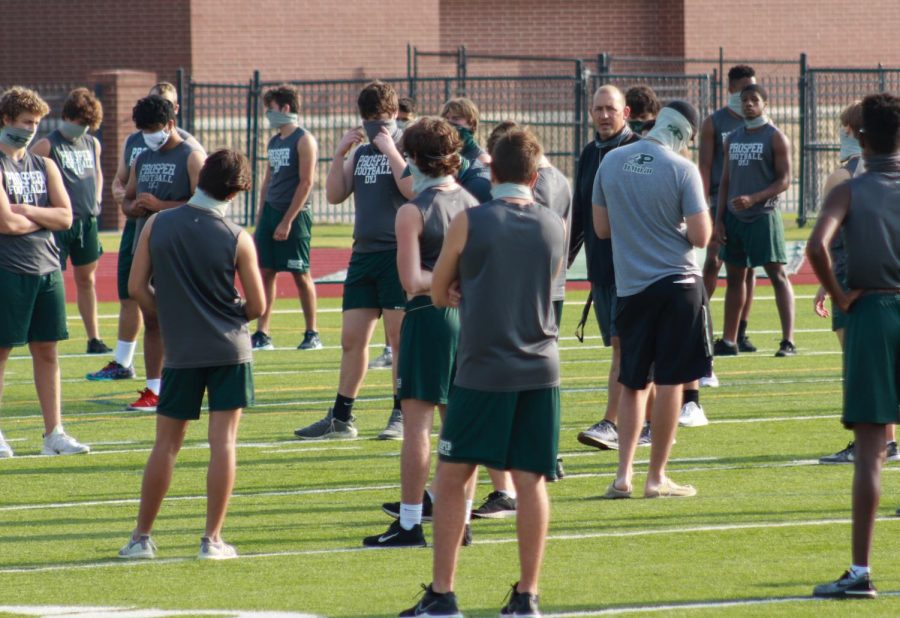 Socially distanced, Prosper Eagles football head coach Brandon Schmidt lectures players on junior varsity and varsity. Both teams were doing walk-throughs for their games on Thursday and Friday. “COVID has had a big impact on how we practice,” Schmidt said. “It has impacted almost every aspect of our program including position meetings, weight room workouts, and study hall.”

Analysis: Football charges into 1st game of season against Prestonwood

After an 11-3 overall record for the 2019-2020 season, Prosper Eagles Varsity football has high expectations to meet this season. Their scrimmage against Flower Mound Marcus on Sept. 17 gave insight on skills they need to work on before their game against Prestonwood Christian Academy tomorrow, Sept. 25. Since COVID-19 brought spring practices to an end six months ago, the Eagles have prepared and trained their new members of the team, and say they are ready to take on their opponent with a strong start to the season.

Tomorrow will be the first home game at Children’s Health Stadium, and tickets have been sold out since Monday, due to limited capacity for new stadium policies. This game against Prestonwood is highly anticipated because it is the first time the two teams will face off in history. As of Sept. 6, the Prosper Eagles football team is ranked 93rd in the nation and 20th in Texas, according to MaxPreps. Last season, Prosper reached the semifinals but took a defeat against Rockwall. Prestonwood is ranked 1,529 in the nation and 205 in Texas.

“We are looking forward to the season opener against Prestonwood,” Head coach Brandon Schmidt said. “Prestonwood is explosive on offense, and they have a solid defense, so it will be a good game.”

I think we have some wrinkles to iron out early, but they are easy to fix. Once we fix them, we will be good. ”

With such high expectations, varsity will try to complete this season with success and raise their rankings at the end of the year. Players said they are feeling confident in their ability to play a good game against Prestonwood and have a solid start to their season.

“I think we have a ton of potential this year,” senior defensive end player James Eckrote said. “It’s going to be a tough season, but I believe in the team.”

Due to COVID-19, this season’s preparation looked different compared to years in the past. All football teams were not able to practice in groups for a few months where they normally would. Despite these challenges, Schmidt said he is feeling unsure but hopeful for the season to be played in full.

“COVID could definitely impact the season, but only time will tell,” Schmidt said. “We have already seen games in the D/FW Metroplex get canceled as teams deal with the pandemic.”

This year, there are some new sophomore additions to varsity that could be a big contribution to the team’s success. Sophomore and wide receiver Caden Pevehouse was on the freshman green team last year and took a jump this year to varsity.

“I think we have some wrinkles to iron out early, but they are easy to fix. Once we fix them, we will be good,” Pevehouse said. “We had a meeting yesterday talking about how our goal this year is to go all the way to state,  and I truly believe that we have a shot.”