Episode 9 starts like most episodes of this series: where the last one left off. With Klaus, Diego and Allison trying to rescue Vanya from the clutches of the FBI, after Diego and Allison fail to even get close to the door Klaus is the last living Hargreeves sibling who can go in, which he fails to do as well, leaving it up to Ben to go in since he can’t be blown back by the energy surges. We see Ben go into the room and stand in front of Vanya, going through a process that I’ll talk about in my spoiler riddled final paragraph. Next, we see a battle between young and old Five to the tune of Generation X’s “Dancing With Myself.” We then continue onto Ben helping calm Vanya down. The episode ends after a lot of stuff that once again, are spoilers, but it is accompanied by a new song from Gerard Way which is “Here Comes the End.”

This episode continues the intensity of the last, between the music and camera angles, mixed with the flashbacks to events surrounding Vanya’s powers from last season, it’s just so flipping intense and just goes to show how all or nothing this moment is. Also what I have to comment on is how the paradox psychosis really brings out Aidan Gallagher’s acting skills, he brings the intensity that Five’s paranoia has gotten to the extent of. Also, it brings one of my favorite lines that I can be certain the cast had a good laugh at, which is “I’m the daddy here!” I have to appreciate Ellen Page and Justin H. Min’s acting in a certain scene. They both handle Vanya’s breakdown with a certain maturity that it definitely needs, along with Ben assuring Vanya that she is no longer alone, something that everyone needs to hear in a moment like the one she is having.

[Everything below here contains spoilers — you have been warned] 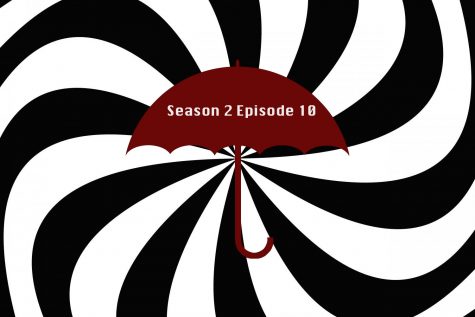 We open the episode in 2006 with Ben’s funeral, yet another funeral that gets ruined by the kids fighting due to Reginald saying it was THE KIDS’ FAULT THEIR BROTHER DIED! Something that just proves how much of a jerk Reginald is. We get back to the present after JFK’s assassination, where all six living siblings are wanted by the FBI. We find out that since Vanya brought Harlan back to life, he now carries some of her power, which has caused somewhat of a situation down on the farm. After Vanya and Klaus have a heart-to-heart about Ben’s sacrifice, the Hargreeves siblings load up to go and help Harlan. As Vanya tries to reach through to Harlan, Diego and Five go to confront the Handler and Lila. With a snap of her fingers, the Handler summons hundreds of commission soldiers who begin to fire upon the siblings. As Vanya reaches through to Harlan and calms him down things start to get more and more intense on the battlefield Vanya comes floating out of the barn and plows down all of the commission soldiers, Lila HECKING COPYS VANYAS POWER, LIKE HOLY COW! Next, Lila returns Allison’s rumor causing her to stop breathing, which was honestly one scary moment between her and Luther where I for real thought she would die. As the Hargreeves discuss Lila they come to the conclusion that she was one of the other 36 children born on the same day as the Hargreeves. As Lila and Five talk we learn that he killed Lila’s parents, the Handler looking for her to use her for her powers. Diego and the other siblings come into the barn as Diego explains the truth to Lila about her birth and powers. Vanya takes away Harlan’s share of her powers then talks with Sissy about leaving with her to 2019, which Sissy refuses for Harlan’s safety. The siblings escape back to 2019, the day after the original apocalypse, to find that first, Ben and Reginald never died, and that instead, a new academy has formed called the Sparrow Academy, with an emo-looking Ben, and thus the series ends.

My discussion and opinion on the second season and series as a whole.

Alright, so I REALLY love this show with all my heart, I really do. That is why I am so passionate about it. One reason I love it is the representation that the writers and cast have put in. Starting with Klaus outwardly being his flamboyant, pansexual self with Dave. Then in season two where we see Vanya get into an LGBTQ+ relationship with Sissy, and with the good representation of Harlan being nonverbal and Autistic, all great things that have had so little light shed onto them, especially in main or recurring character roles. Now, for a scene that made me sad, toward the end of season two, we see Ben sacrifice himself to free Vanya, which while yes, it was sad that we may not see the Ben we know and love anymore in the series, I believe it really speaks to his kindness and overall character. Now with that out of the way, I give season two of The Umbrella Academy a solid 10/10 umbrellas, the whole series overall getting a 20/20 umbrellas. I highly suggest watching this series on Netflix and leaving your own opinion in the comments.

For more behind-the-scenes information go check out this podcast by Netflix!