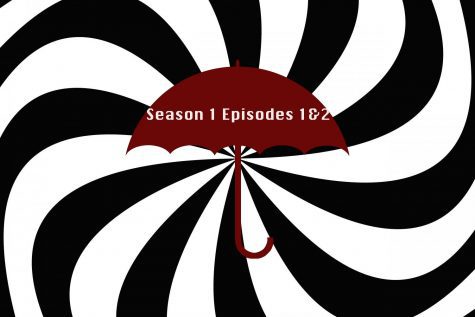 In the first episode, we are introduced to the Hargreeves family from what we can assume is Vanya’s birth, establishing her as the main character right off the bat. Then, viewers go all the way through their training, disbanding of the academy after Ben’s death, and a flash-forward to several years later when the academy members are in their 30s, gathered for their adoptive father’s funeral. During this funeral, a small fight breaks out between Luther and Diego, which is quickly broken up by a blue time portal opening in the sky. The supposedly long-lost No. 5  falls out of the portal and into the current 2019 timeline. We learn that Five was stranded in the not-so-far future for the past 20 or so years where an apocalypse has stricken the world. After years of calculations, he is finally able to time-travel back, but his 50-year-old brain is trapped in a 15-year-old’s body.

In Episode 2, we follow Five as he tries to follow his one lead to find the person who caused the apocalypse. The single lead was a fake eye that hasn’t even been made yet, with only his drug-addicted brother Klaus as an accomplice. Hazel, played by Cameron Britton, and Cha Cha, played by Mary J. Blige, two new main characters from a hitman-esque group arrive on the scene.  They are out to find and kill Five.

So, looking at this episode — and especially the camera angles — as we see Vanya begin to play a song from “Phantom of the Opera,” bits and pieces of character reveal themselves. The camera follows Luther as he suits up for a spacewalk. Then the violin solo picks up to show the siblings’ faster-paced lifestyle.

As Klaus gets out of a rehab facility, a more peaceful/somber tune plays and continues as the siblings get news of their adoptive father’s death The violin picks up once again when we see Klaus get a ride in an ambulance and get the news, as well.

When Luther suggests that Klaus summon Reginald, the show features the iconic tennis with Hitler line, which Robert Sheehan actually improvised. A flashback to the “Umbrella Academy’s” debut mission accompanies an upbeat pop song that has become a trademark of the show for fight scenes. Speaking of upbeat pop, an iconic and heavily ‘gif’ed and ‘meme’ed dance scene to Tiffany‘s “I Think We’re Alone Now,” plays. I absolutely loved the siblings starting their own dances throughout the house before a dollhouse-esque camera-pan shows everyone dancing at once. I imagine that was quite complicated for the filming/editing crew to do, but like most of the show’s effects, they pulled it off flawlessly.

At the end of that scene, we see the portal that Five falls out of, and I have one thought: ‘HOLY HECK, THE CGI-SPECIAL EFFECTS HERE ARE STUNNING!’ One thing I wish to point out is Klaus’s choice of umbrella in the funeral scene. The prop reveals his individuality and more flamboyant personality in contrast to those of his siblings, who carry plain black umbrellas. I also love how they show Vanya’s struggle to fit in during their childhood, including when she draws on her own umbrella tattoo.

If you pay close attention at the 45-minute mark in Episode 1, along with other times throughout the season, you will realize that the archway forms an umbrella. In Episode 2, it starts a formal Hargreeves family dinner where Five runs away.  I, as a 16-year-old, find this scene hilarious because it is a pure moment of teenage angst and “you-can’t-tell-me-what-to-do,-dad” emotion. While it is painted as an important and pivotal moment in Five’s story, it is the little times like that one that cause me to have a small laugh. Allison and Pogo then watch old security tapes from their childhood, which I personally find weird and violating, but perhaps that was the point where the writers tried to convey, that compared to normal families who have home videos, the Hargreeves have invasive security tapes. At the end of the episode, we see Five in the apocalypse where he discovers his dead siblings. I cannot imagine the pain he must’ve endured and the time he spent blaming himself.

For more behind the scenes information go check out this podcast by Netflix!