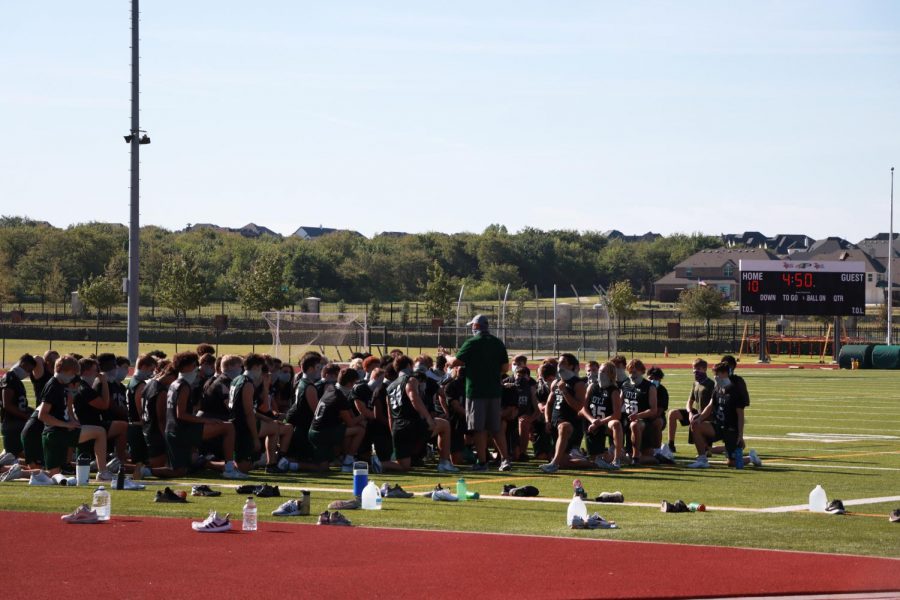 Football players kneel at the end of practice while their coach talks. The Big 10 and Pac-12 conferences announced their football season will be cancelled for the 2020 fall season. “After scrambling for weeks to get things in order, it was obvious cancelling was the best decision for the conference.”

Big 10 and Pac 12 are the first large, well-known conferences to announce their plans for the 2020 fall sports season. Within hours, people started voicing their opinions, some in support and some not. It made sense that college football would be cancelled in the midst of a global pandemic. It made sense to the coaches, too, considering the vote for cancellation was 12-2. But, after taking a closer look, this decision may have bigger consequences than upset sports fans.

First of all, athletes should be contacted before decisions are made that affect their futures.

It’s important to understand what led to making this decision. Even before the announcement was made, players from the Pac-12 started the “#WeAreUnited” movement to voice their concerns on how COVID-19 was being handled. They made an attempt to call out how the conference had handled the health, well-being and financial situation of athletes.

After their announcement, most athletes were not shocked, but instead, they noted disappointment. After scrambling for weeks to get things in order, it was obvious cancelling was the best decision for the conference. But, they did it without contacting the affected athletes.  The Pac-12’s decision shows it’s time for a change in college athletics. Athletes deserve a voice, and their health should be prioritized, always. The way they were treated during the making of this decision is completely uncalled for. Keeping them in the dark and not communicating is the easiest way to lose trust with athletes. Luckily, Pac-12 has said athletes will be allowed to obtain their scholarships and stay on campus, with access to academic and well-being support. Unlike the Pac-12, the Big 10 didn’t release specifics on what schools will continue to provide for players, but many individual schools issued official statements. Ohio State, Wisconsin and Minnesota stated athletes will remain on scholarship and are welcome to stay on campus with academic support, health insurance, and performance training.

Although it may seem like a temporary setback for football players, this is not the case for other athletes whose sports didn’t just get cancelled, but cut. Stanford is a good example as they were forced to cut 11 varsity sports after having their football season cancelled. Fencing, field hockey, sailing, and men’s volleyball were all cut for the 2020 sports season. It may seem unlikely, but football and men’s volleyball are more connected than we think. When football is cut, so are its fundings. And most of those funds roll over to support smaller sports such as rowing and sailing. Colleges are put in a tough situation in having to decide what sports should stay. It’s unfortunate that smaller varsity sports are so underfunded that they have no other option. This is a wake-up call for schools to start paying attention to sports other than football, basketball and women volleyball.

In conclusion, the recent announcements from the Pac-12 and Big 10 show what major changes need to be made in the world of college athletes. The well-being of athletes should come first, always. In all sports, not just football and basketball.  Let this be a year of growth and revision in the sports world. Conferences and the powers that control them cannot continue to break the backs of athletes for the benefit of the business.