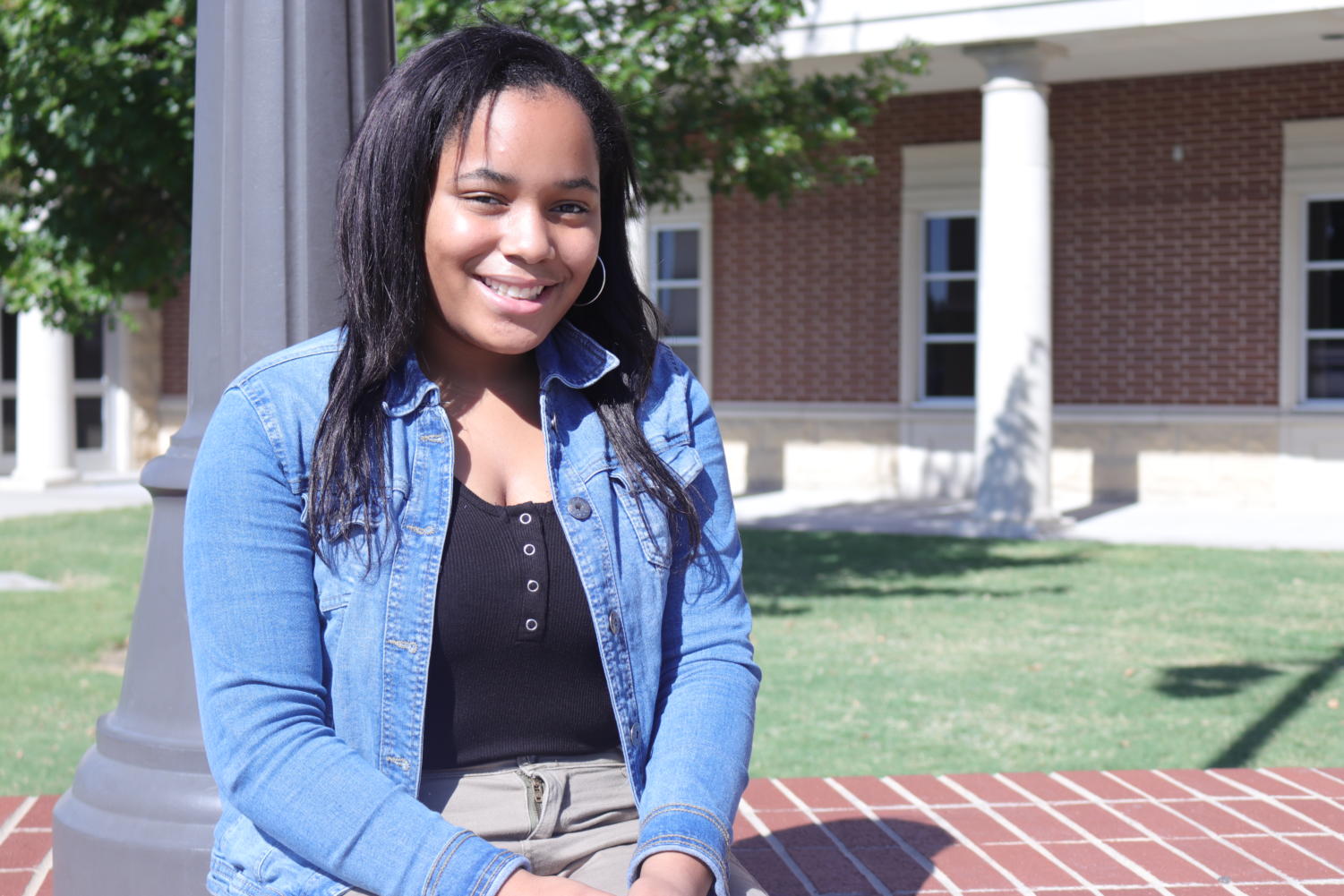 Freshman Kimora Evans takes a minute to talk about fostering a cat for a soldier friend while he is stationed overseas. Evans created an Instagram account for the cat so that the pet's original owner can stay in touch. "My mom met the soldier in Germany," Evans said. "He had a cat and decided to let us watch her for a couple of weeks." Those weeks then turned into a long-term placement. (Christi Norris)

Freshman Kimora Evans takes a minute to talk about fostering a cat for a soldier friend while he is stationed overseas. Evans created an Instagram account for the cat so that the pet's original owner can stay in touch. "My mom met the soldier in Germany," Evans said. "He had a cat and decided to let us watch her for a couple of weeks." Those weeks then turned into a long-term placement.

Freshman Kimora Evans’ orange-tabby cat story all began three years ago when her mom, Althea Williams, introduced her to an American soldier stationed in Germany. When the soldier, Joe Herrera, met Evans, he requested her to watch his cat while he received orders to head to a new duty station.

“When Joe Herrera asked if I would adopt her because he would be deploying and doing more long, field training, I said, ‘why not,’ Williams said. “Besides, I pet-sat for Anna years earlier.”

Evans and her family took on the task and became attached to the cat. Then, Herrera heard that Evans was moving to Virginia, and he asked that she take the cat along with her.

“He trusted us because we watched her before and decided to give her to us because he was a single soldier,” Evans said.

Previously in Germany, Evans watched the cat for about a month while Herrera was gone. After settling in, Evans and her sister, Sierra Evans, decided to name the cat Anastasia, Anna for short and created an Instagram account (@annabanana4.20) so the soldier could stay updated while deployed.

“My sister came up with the idea as she explained that a lot of people get popular off pets having an Instagram, and she was wondering if PetSmart would contact us,” Evans said.

“As a U.S. soldier, I knew what it felt like to leave a pet behind so that’s why we created Anna’s Instagram page for her previous owner,” Williams said. “He follows her post along with others around the globe.”

The photos that are posted only cover half of the fun that the family experiences.

“One day, we couldn’t find her, and it was snowing outside. We followed bunny prints all around the neighborhood,” Evans said. “Then, we came into my mom’s room to look for her, and we heard a ‘meow.’ She was inside my mom’s dresser the entire time.”

Herrera has commented on many of Evan’s Instagram posts.

“I have no idea why she does this other than to taste test the water,” Herrera said about a post (shown below).  “Glad to see Anastasia is doing well.”

Got caught dipping my paws 🥵😋

Because of the love and care that has been provided by Anna, Evans and her family are expecting to hold a miniature birthday party to celebrate their tabby family member.

“Anna has been a joy to have in my family. As many may know, cats are very low maintenance, full of personality and attitude,” Williams said. “One reason I didn’t mind adopting Anna, was a few years back I received sudden orders to move to Germany and couldn’t take my chihuahua right away due to the strict animal laws. It was very difficult to find a home for her. It broke my heart to lose her.”

Today, there’s a non-profit organization called Dogs On Deployment which aims to find volunteers to take care and board pets of active service members. So far, the organization has gathered over $680,000 in donations and has rescued over 6,000 pets. Visit the website today to learn how you can help.