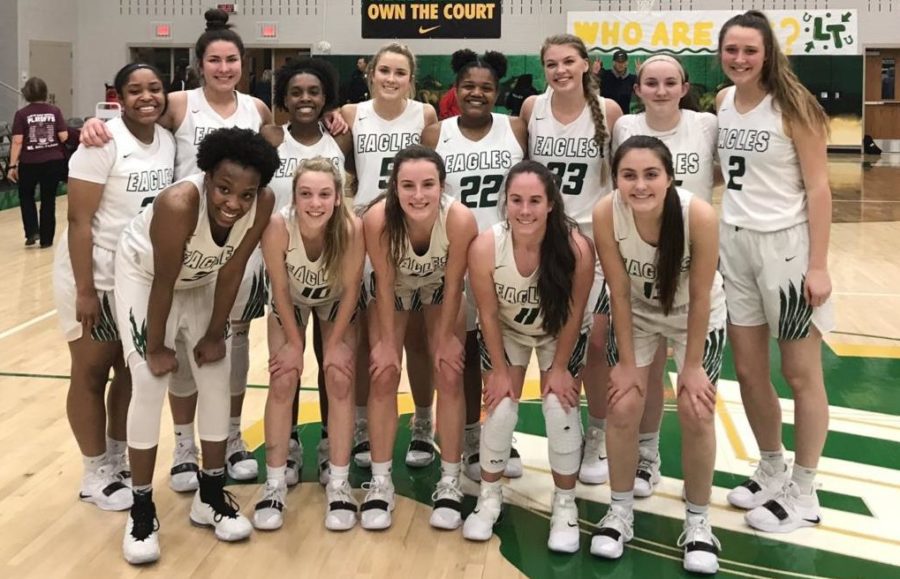 Girls basketball advances in playoffs after a win over Plano, 55-51. The Eagles advanced to the sweet 16 with the win. Prosper would go on to advance to the regional finals, but fall short to Allen.

The Lady Eagle basketball season came to an unfortunate close as they fell to their district foe, Allen, by a final score of 58-53 Saturday afternoon. Prosper was able to maneuver all the way to the regional finals but came up a little short. The ladies seemed to have controlled most of the game, but they let Allen make a remarkable comeback in the closing quarter to secure the victory.
Season overview
Although the final outcome wasn’t the most desired, there is far from nothing to be ashamed of coming from this team. Even with All-American and senior Jordyn Oliver as the team leader, there was no telling how the team would adapt to the 6A transition this season. But early on in the schedule, all the skepticism was put to rest. Prosper showcased well in the preseason tournaments and looked good enough to at least be competitive in their competitive district.

The ladies were much more than competitive. They finished 6-4 in a district with tough opponents Plano and Allen, which exceeded many expectations. In the final district game, the Lady Eagles found themselves in a highly intense battle with Plano. Even though a playoff berth had already been secured for Prosper, this provided as a valuable game that gave them a taste of the pressure they would soon face in the playoffs, including against Plano themselves.
A memorable run
The Lady Eagles tallied wins against Rowlett, Waco Midway, Plano and Vista Ridge in their memorable run. Out of the four contests, the real nail-biter seemed to come against district opponent Plano. Of course, the ladies came out with a 55-51 win. While this wasn’t as high-scoring and close as the previous matchup, there wasn’t space for the Lady Eagles to be comfortable with the season on their line. As this was their third time facing off this season, both sides knew each other’s strengths and weaknesses well, which likely kept the game close.
The future
Once again, there should be a plethora of more things to be excited about than disappointed for the Lady Eagles. To sum it all up, they exceeded expectations and proved the doubters wrong. Going into next season, there’s no question Prosper will lose one of the best athletes to ever play for the Lady Eagles in Oliver. But as a leader, there’s also no question Oliver has taught and motivated the young talent to step up. As old doors close, new doors open is a fantastic way, to summarize what is to come in the future for Lady Eagle basketball.