Looking Back – Looking Forward
Senior sees end of 1 career, start of another 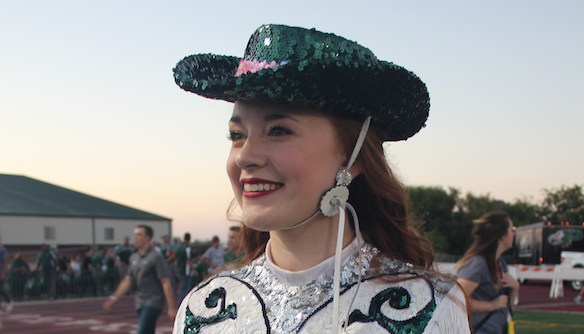 Senior Lieutenant Lizzie Ramsden wears her Talonettes uniform at a football game. The Talonettes practice every day to perfect their halftime performances, which rally support for the football team. “We put so much time and effort into it to put on the best show that we can,” Ramsden said.

Every year since Lizzie Ramsden joined the Talonettes, she has watched the senior members hang up their hats during the end-of-year spring show. This year, it’s her turn.

Talonettes senior Lieutenant Lizzie Ramsden has been a member of the school dance team since her sophomore year. Now that she’s a senior, she looks forward to a memorable last year with the team, ending her high school career on a high note.

“I have never been more excited to be a senior because I’m excited to move on to the next chapter of my life,” Ramsden said. “But it is also so heartbreaking because I don’t want to leave the team.”

Ramsden has trained in ballet, tap and other styles of dance since she was a toddler at her mom’s dance studio in Virginia.

“I was on competitive teams from the age of four, and then we moved here,” Ramsden said. “I started competing in Texas and across the Southern states, and then I actually got the chance to compete in New York.”

She joined the Talonettes as a sophomore when she figured it would be a good way to be involved with school as well as make friends who also love to dance.

“I didn’t really understand that drill team was so much dancing,” Ramsden said. “I thought it was more like a cheer team, and saw them perform, and I was like ‘Oh my gosh that looks like so much fun.’”

According to Lizzie, being a part of the Talonettes has granted her a second family.

“I can talk to any of these girls on the team, and we all know each other very well,” Ramsden said. “We are always so supportive of each other.”

According to her teammates, Ramsden serves as an inspiration and role model, and is always there for them to brighten their day.

Since Ramsden has been part of the Talonettes for the past three years, she is able to help the new members become accustomed to the team.

“It’s my first year as a Talonette, and Ramsden has really helped me get familiar with things that are new to me,” sophomore line member Reagan Newton said. “She just tries to help us be the best at all times.”

While Ramsden is there to help and inspire her teammates, she said her mom, a former dancer, is there to provide that same support for her.

“I love to dance, but she loves to watch me dance just as much as I do it,” Ramsden said. “I always want to go out there and do my best, and I know she’s always out there cheering for me.”

Performing at games is one of Lizzie’s favorite aspects of the Talonettes.

“It’s unlike anything else. It’s just so crazy the adrenaline that comes with that,” Ramsden said. “The football team’s either doing good so we got to keep up the energy, or they might not be doing so good, so it’s like, ‘let’s be strong during this performance.’”

While Ramsden said she loves performing with the Talonettes for the school, the student body’s reaction leads the team to believe the audience loves watching them, too.

“I know a lot of people who are inspired to join just by watching them perform at pep rallies and games,” sophomore Riley O’neal said.

Every morning, the Talonettes arrive to the school at 7 a.m., warm-up and run their dances. They said their goal is to improve and bring school spirit to the student body.

“I think that a lot of people take our dances and what we perform for granted. Not necessarily that they ignore it, but we do work so hard,” Ramsden said. “We put so much time and effort into it to put on the best show that we can.”

As a senior, Ramsden doesn’t want to leave her team after she graduates, but she said she knows that the Talonettes are in good hands.

“I value everything that the directors and my fellow teammates have taught me, and just how they’ve helped me through my high school career,” Ramsden said. “It’s going to be really sad to leave, but it’ll be really fun to come back and see what the team accomplishes.”