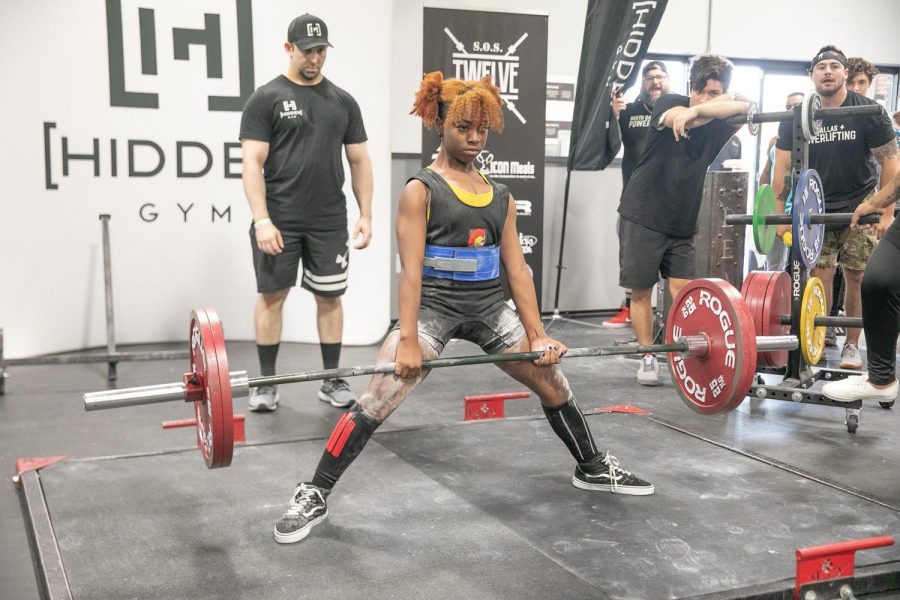 Training at the gym, senior Ryan Buckner engages in a deadlift. Ryan said this one represents her favorite type. She has goals to lift 320 pounds by the summer, along with setting a world record.

She plans to continue training until she can eventually meet her overall goal of competing in a world competition.

“While strength training in early 2018, I learned that my personal trainer was a powerlifter,” Nakia Buckner said. “By the summer, I participated in my first powerlifting meet. I found that the powerlifting community is so supportive and welcoming of its athletes.”

Ryan cheered her mom on at meets and was later introduced to her trainer.

“During my first powerlifting meet, Ryan fell in love with the sport,” Buckner said. “By the next summer, Ryan started training along with me with our current trainer, Damon McCullough, of North Dallas Strength.”

Ryan trains outside of school three times a week, and five times a week during the school powerlifting season.

“Ryan has actually become my mentor in the sport,” Buckner said. “Ryan is very helpful with guidance and advice on how I can be a better lifter.”

Training together, the duo supports one another and helps the other grow. The mother-daughter team described themselves as each other’s “biggest cheerleaders.” Aside from her family’s support, Ryan found more support when she joined the powerlifting team.

“When I’m not feeling the best about it, they’ll (her teammates) still be like, ‘You still do good,'” Ryan said. “It’s a very friendly sport. Even if you lifted more than them, they’ll still cheer for you.”

Ryan said she found that everyone she surrounded herself with – her family, closest friends and boyfriend have all had some type of connection to powerlifting.

“Ryan and I became really close our senior year season by training at the same rack,” senior Amandalynn Garst said. “Constantly pushing each other to get better throughout the season, and became even closer in the lifts leading up to the state.”

Garst, who also plays lacrosse, went to state alongside Ryan.

“We spent the whole state trip together,” Garst said. “We made good memories, had good laughs and even shed a few tears together after we finished our last lift at state – all of which helped us grow closer together and form a stronger friendship.”

Ryan tried other sports in the past, but found them incomparable to powerlifting. She prefers individual, direct physical strength sports, such as discus track.

“I went along with the other sports that my parents kind of just put me into,” Ryan said. “I’ve never been passionate about a sport like I have this one. It makes me happy. I like to see the progress, and it also makes me feel better, because I know I’m also bettering myself by getting stronger.”

​​”I talk with each athlete about what their goals are for the season and for each meet,” Thompson said. “I want them to know where they are going. For Ryan in particular, we approached this season with the goal of winning state on our mind.”

Although her stable support system played a role, Thompson said Ryan’s drive and passion brought her to accomplish her goals.

“Setting goals allowed us to focus on getting better each meet and working toward the numbers we need in each event,” Thompson said. “We talked about how each meet was – and the opportunity to push to see how close she was to those numbers. Then, when we got to state, it was simply trying to have her best day and put all of her best lifts together at the same meet.”

Just like every athlete, Ryan said she faces challenges that can inhibit her drive. For example, she struggles with pain due to back problems and flat feet.

“My biggest thing that I face physically and mentally is my own body,” Ryan said. “Sometimes it bothers me that I can’t do something right now, because my hip is hurting or my back is hurting.”

“Mentally, I tend to compare myself to other people,” Ryan said. “I think, ‘Well, I want to do this’ but I know that I will do it, it just takes time. I want immediate progress, but I know that have to wait.”

Ryan has proven to overcome her challenges – shown by her participation in state.

“I have seen Ryan grow and become more confident in her abilities,” Thompson said. “She knows that she has put in the work and that it takes her focus and preparation to have her best lift. She has learned to feel what each lift is supposed to be and how it is supposed to go, so if something goes wrong she knows exactly what to do to fix it.”

Ryan has set four state records and five national records. Looking forward, she plans to compete in a meet in July, where she hopes to squat 315 pounds and deadlift 320 pounds. She also will continue her journey of powerlifting both in college and as a hobby.

However, Ryan’s ultimate goal is to make it to Worlds.

“There are different federations, but I did look at a set of records, and I am actually able to break world records,” Ryan said. “That’s one of my goals, to go and break a world record. That’s always what I’ve wanted to do.”