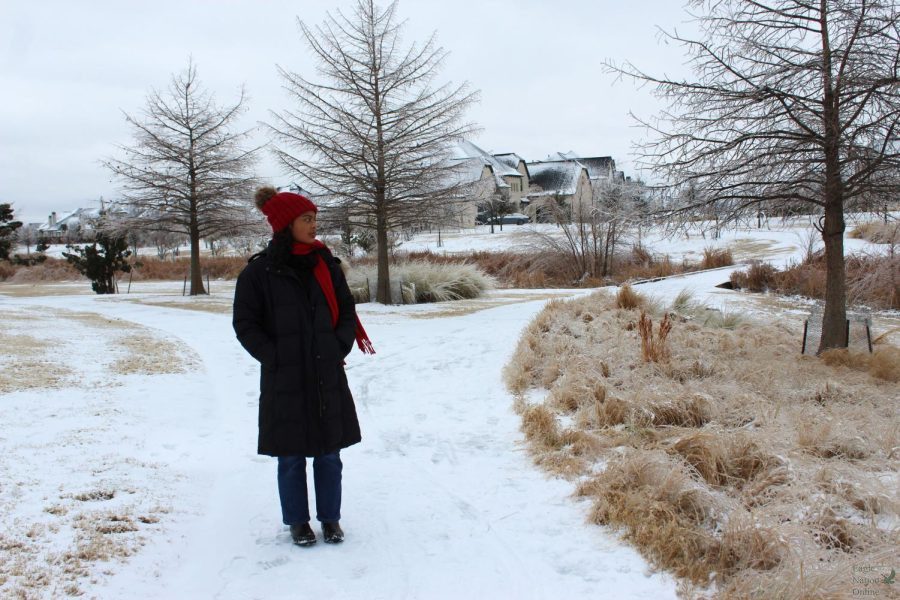 Looking out at the snow, junior Cate Emma Warren stands on a frozen sidewalk. With a predicted drop in temperatures and news of snowfall, school was canceled between Feb. 3-4 for student and staff safety. "I don't think Texas will ever be fully prepared for snow storms," senior Jessie Kuhn said.

The week of Valentine’s Day started off like every other early February week in Texas last year. It was not freezing, but still fairly cold for regular Texas residents, and that was when already cool temperatures began to drop.

Late Saturday night, Feb. 13, 2021, the weather started to decline, with little hope of a rise in temperatures. Overnight, Texas’ infamous brown-colored winter grass was covered in a blanket of white snow. The sudden snowfall left Texans without power and warmth in the blink of an eye. There was only so much left to access without power. There was no WiFi for Zoom classes. No warmth coming from heaters. No food accessible from the fridge.

Also known as ‘snowmageddon,’ once school was canceled, students began having flashbacks to the previous years’ school cancellations after spring break. The timing was so close to the year before, and being in-person for a whole semester after being shut down during the previous year, was alarming and frightening.

“Personally (the storm) didn’t affect me as much as it did others,” sophomore Lauren Garst said. “My family was without power, but I had friends who were having people stay at their house because it got too cold. The snowstorm last year helped me to better understand how grateful I am for everything I have, and how when times are rough, we should all try to come together and help each other out.”

The reasoning behind the mass amount of power outages across the state, or rolling blackouts, is that most of Texas did not have access to power plants in other states since it is on its own power grid. The rest of the country is connected in two, eastern and western electric grids.

The Electric Reliability Council of Texas – ERCOT – was created in 1970 to deliver electricity at low prices. The ERCOT ensured Texans at the time that power outages would be resolved quickly.

However, as the days moved on without power, living conditions got worse. It also became clear last year that the effectiveness of the ERCOT is wearing as people were left with high electric bills at the end of February.

“The snowstorm of 2021 was a crazy and unpredictable time,” sophomore Anna Stringer said. “My home was one of the very few that did not lose power throughout the storm. Seeing the horrible effects that the rolling blackouts had on thousands of families across the state was heartbreaking and made me feel selfish.”

Stringer said her family offered rooms in her house for any neighbors that were struggling, and they let others come use their wifi.

“My biggest takeaway from this storm was my ability to help others,” Stringer said. “We were able to help several families and it was amazing that we were able to do that. I will always remember that I have an ability to affect others’ lives and that I should always choose kindness.”

Some experts say extreme snowfall is one of the many effects of climate change. Global warming has increased since the mid-20th century. The advancement of climate change makes winter storms like this past one, worse and more damaging as time goes on, via the Johns Hopkins News-Letter. High temperatures from global warming cause more evaporation, which in turn leads to more precipitation, and with low enough temperatures, this precipitation can turn into snowfall.

“For me (the snowstorm) didn’t really affect me too much,” junior Gabe Torres said.  “I just stayed at home and because the electrical grid in my neighborhood is connected to the local fire station, we were fortunate enough to not lose power.”

Last year’s storm can also be seen as a way to prepare Texans for the future. After being startled by being hit so hard last year, precautions, and changes were made this year.

“I definitely think last year was a wake-up call for everyone, as those storms really exhibited just how vulnerable Texas systems are when it comes to winter storms,” junior Lauren Grammer said. “I think this time around people were definitely more prepared, especially for a storm that was not going to be as severe as last year. The forecast was only a day or so of snow but people still emptied grocery store shelves. I know my family pulled out all the portable chargers and blankets we could find, just in case. Last year’s storms definitely taught us to be more cautious with winter weather.”

The storm should be seen as a wake-up call for Americans to put a new change into their lives and to treat the environment better. The more pollution from cars, the more waste put into the ocean, the more water that is used unnecessarily, the closer we are to losing the Earth and its resources. What are we supposed to do then? There is no Planet B. There is one living planet, and it is up to everyone to make the change to keep it.