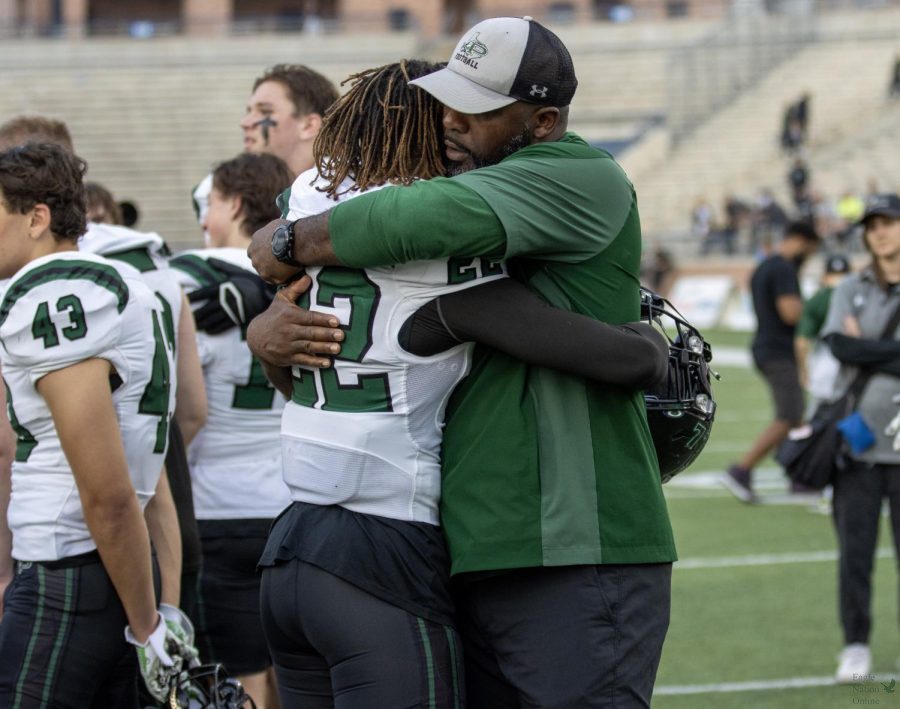 After 14 weeks of playing in the regular season and playoff games, the 2021-22 season has come to an end for the Prosper Eagles. The Eagles ended the season ranked 34th in Texas, according to MaxPreps. Overall, the Eagles scored 460 points,  and opponents earned 312 points against them. The Eagles ended the season with a 9-5 record after a close loss to the Denton Guyer Wildcats in the quarterfinal round of the UIL Texas Football State Championship, 6A Division 2.
Denton Guyer

For the second year in a row, the Eagles fell to the Denton Guyer Wildcats in the fourth round of the playoffs. Last year, the final score was 30-24 in triple overtime, played at the McKinney ISD stadium. On Saturday, Dec. 4, the final score was 22-25 and was played at the Allen Eagle Stadium. After the win, the Wildcats updated their record to 13-1.

The playoffs were not the only time the two teams faced off this season. In week six on Friday, Oct. 1, the Wildcats beat the Eagles, 35-7, at Collins Athletic Complex.
Regular Season
The Eagles had 10 in-season games and one scrimmage. The first four games against South Grand Prairie, Mansfield Lake Ridge, Southlake Carroll and Arlington Lamar were all non-district. Out of those four, the Eagles only lost to Southlake Carroll with a final score of 31-0.

The other six games were in-district, against Little Elm, Denton Guyer, McKinney, Denton Braswell, Allen, and McKinney Boyd. The Eagles ended fourth in the district with a 3-3 record.

The beginning of the season was tough after taking losses to Southlake Carroll, Little Elm and Guyer, but the Eagles turned that around quickly after pulling off a win against Allen 28-23. The win ended Allen’s 11-year in-district winning streak and got state-wide and national attention.

Playoffs
The Eagles earned area, bi-district and regional championships by winning against Flower Mound Marcus, Grand Prairie and El Paso Eastwood. The Eagles fell short to Denton Guyer in the quarterfinal round, bringing their playoff run to an end.

The Eagles made it to the “Elite Eight” in the playoff tournament for the third round in a row, but ended their season after losing to another one of its home district teams – Denton Guyer.
Key Players
The Eagles had a few key players that heavily contributed to the team’s overall success throughout the season.

Senior wide receiver and corner Tyler Bailey also delivered for the Eagles. With the ability to play offense and defense, he ended the season with 57 receptions, 1,057 yards and 14 touchdowns.

On the defensive side of things, junior Dylan Hinshaw and senior Justin Endicott did their jobs to create a strong defense throughout the season.

On defense, Hinshaw plays defensive end and had 37 tackles, 40 assists, 16 tackles for loss and eight sacks. Hinshaw also plays tight end and had three catches, 36 yards and one two-point conversion.