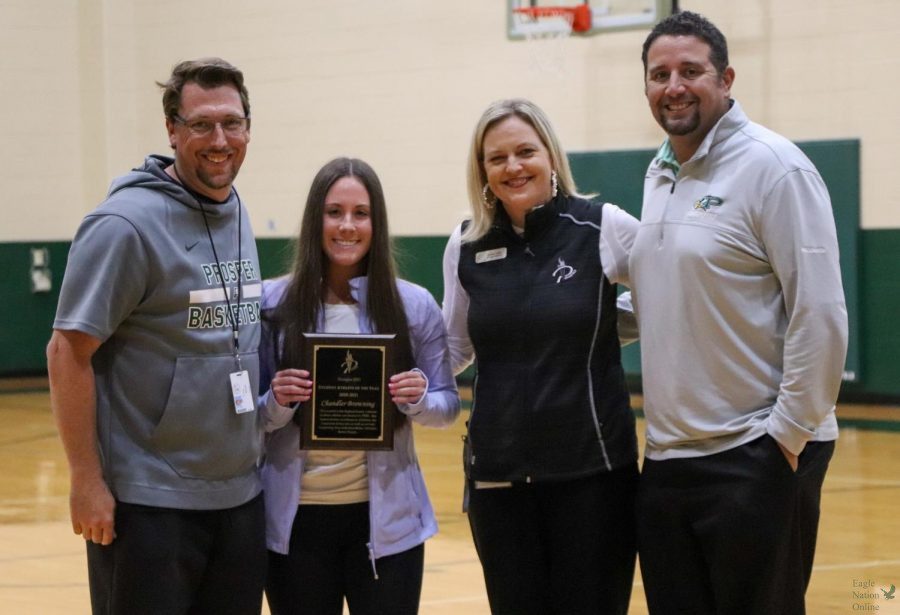 Standing with girl's basketball coach Trey Rachal, Director of Athletics Valerie Little and girl's golf coach Ryan Salinas, senior Chandler Browning accepts her "Female Student Athlete of the Year" award. The ceremony was held as a surprise for Browning, who played golf and basketball for all four years at Prosper. "When I first met her at tryouts her freshman year and she took her first swing, I knew we had something special," Salinas said. "I just didn't know three years she would be hosting the district champion trophy."

Senior Chandler Browning was named Prosper Independent School District’s Female Student-Athlete of the Year Tuesday, May 18 at 2:45 p.m. Browning was a dual athlete for all four years at Prosper High School. She was a member of the varsity basketball and varsity golf teams.

“Her grades always hit the spot, she was Academic All-State and Academic All-District, and everything outside of the classroom is also what we stand for,” golf coach Ryan Salinas said. “All of it adds up when you include everything she did on the basketball court and golf course.”

Browning plans to continue her golf career at the University of North Texas next year.

“Receiving female athlete of the year means the world to me,” Browning said. “I could name about 15 other girls that are just as deserving as I am. I am so grateful for all of the opportunities I was given within Prosper ISD. Playing two sports and succeeding in both would not have been possible without my amazing teachers, coaches, teammates, and my parents. I’m just overwhelmed by the non-stop support from the people in my community, and I could not be more thankful. It is such an honor to receive this award, and I will be forever grateful to Prosper High School!”