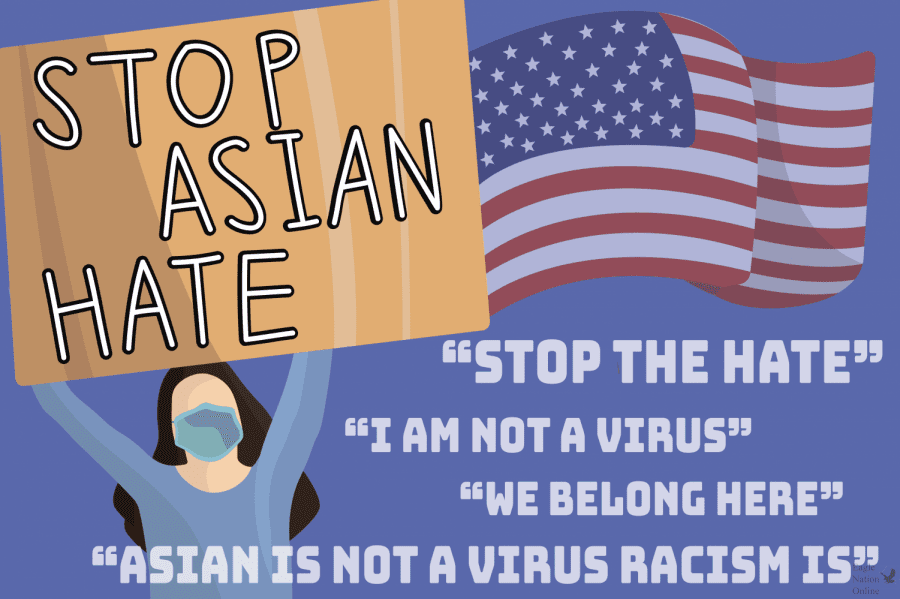 A graphic made by junior Soomin 'Julia' Chung argues against Asian American and Pacific Islander hate crimes. Anti-AAPI racism hate crimes have increased over the last year during the pandemic. "I think the number of hate crimes towards Asians has increased since pandemic because many feel anger towards them for 'introducing the virus,'" junior Mina Choe said. "But, I also think it has just given justification for their racism they already had but internalized."

Gunfire echoes as screams flood through the streets. Confusion and chaos surround the scene as eight victims lie wounded. That event happened in March. On Tuesday, May 18, the U.S. House of Representatives voted to approve a bill to address the rise in hate crimes against Asian Americans during the COVID-19 pandemic.

Authorities charged Robert Aaron Long, 21, with eight counts of murder. Long went to three different Asian-owned massage parlors and shot eight people to death near the city of Atlanta, Georgia, on March 16. Out of the eight people killed, six were women from Asian descent, four of them being ethnic Koreans.

Although the investigators haven’t reported any evidence on whether the shooting incident was racially motivated, fear grew among Asian Americans.

“I do think the Atlanta shooting was racially motivated, considering the majority of the people he killed were Asian, and he targeted only Asian owned spas,” junior Mina Choe said. “In addition, the cop defending his crime as not racially motivated, is racist himself which is evident is old tweets of his, in which he brags about his new shirt that reads ‘COVID-19 imported from China.’ Also, I think they are trying to say it wasn’t a hate crime in order to lessen his sentence because otherwise he’d then be charged with a hate crime on top of murder.”

Asian Americans and Pacific Islanders, also known as AAPI, have been victims of recent racist attacks. But unfortunately, it doesn’t come as a surprise with racism becoming a common trend in the United States.

“There have been some times when I felt embarrassed about my ethnicity when others have singled me out for being Asian,” junior Carrisca Baker said. “Whether it be stereotyping me, or negatively pointing out things about my culture.”

Choe said she felt the effects of racism against Asian Americans, as well.

“I have never experienced violence toward me due to racism,” Choe said. “But I have definitely had derogatory remarks said to me, such as making fun of how Asian languages sound, how small my eyes are, etc.”

Ever since COVID-19 has taken part in 2020, it has been an ongoing excuse to vandalize, bully, murder and use online hate speech against Asian Americans.

“More than 2,100 Anti-AAPI violence incidents related to COVID-19 were reported across the US between March-June 2020,” AAPI Women Lead said.

With Chinese-owned businesses and restaurants being avoided or vandalized, some people have started to distrust and fear the Asian community ever since the pandemic started.

“The Flushing Chinese Business Association estimates that business is down up to 40 percent in the neighborhood, despite there being no known cases in New York City,” Mayor of New York City Bill de Blasio said.

Viral videos show Asian Americans being tossed around, harassed and robbed among elderly or teenage citizens in the US, making Asian Americans to report being terrified of what there is to come.

Minorities have been a big part of this growing society, whether it’s African Americans, Latinos, Indians, Asian Americans, etc. They have shaped American culture in general by contributing to pop culture, fashion, food and music. Recently, the topic of racism has resurfaced into the media ever since the Black Lives Matter movement gained more attention in early June 2020.

“I think the number of hate crimes towards Asians has increased since pandemic because many feel anger towards them for ‘introducing the virus,'” Choe said. “But I also think it has just given justification for their racism they already had but internalized.”

“I think the ‘Stop Asian Hate’ movement is definitely needed to combat the rise in unjustified hate crimes occurring over these past recent months,” Choe said. “It brings awareness to issues not being covered by the news, despite several cases being very violent and severe.”

The movement not only spread awareness, but also encouraged Asian Americans to take a more vocal stance against violence and hate.

“I believe that Asian hate has always been prevalent, but sadly it’s more than ever,” Baker said. “Being a part of the Asian community, the movement has made me feel more accepted for who I am.”

In the month of May, Asian American and Pacific Islander Heritage Month is celebrated. It was used to commemorate the immigration of the first Japanese to the United States on May 7, 1843. This also marks the anniversary of the transcontinental railroad tracks, which were built by Chinese immigrants.

“I think the purpose of Asian American Heritage month is to teach others about the various different cultures that are encompassed by the term ‘Asian,'” Baker said. “It also raises appreciation for families who have immigrated to other countries.”