Bowlers ‘strike’ down competition together 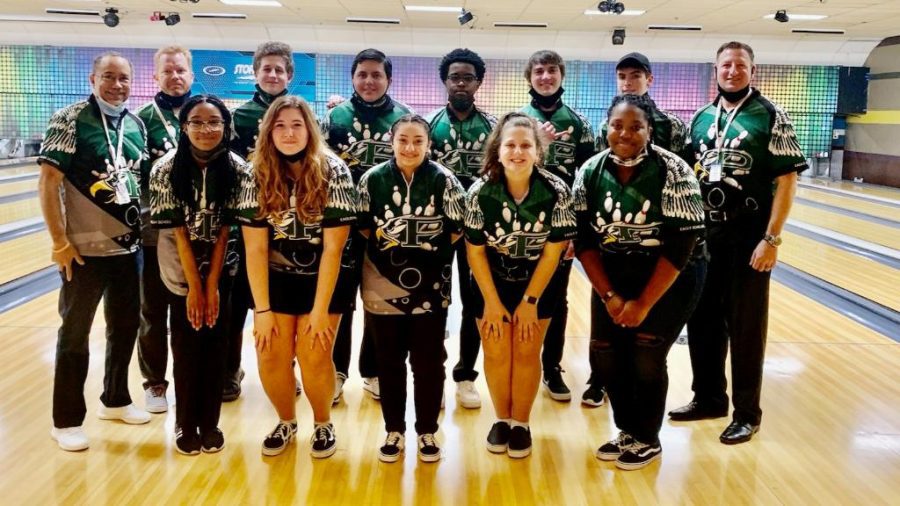 After their second game of the season, the Prosper Bowling Team gathers in front of the lanes at the Plano Super Bowl. Their last competition took place March 20. Pictured here is Coach Mickie Tate, Coach Daniel Simons, Aaron Coleman, Roman Salinas, Jayden Okwesa, Dylan Bell, Noah Nelson, and Coach David Coleman in the top row. The bottom row holds Naiya Okwesa, Chesney Stinnett, Sydney Topper, Ashley Coleman and Hailey Herron. "My favorite part about the team is the team itself," Herron said. "Everyone was so welcoming, and they are some of my best friends."

Ready to knock down the 10 pins sitting upright at the end of each of their designated lanes, the Prosper Bowling team members said they come ready to earn strikes or take spares in achieving their goal to get more points together to defeat the other clubs they face.

The bowling team has competed since 2013, with a varsity team and junior varsity team made up of students at Rock Hill and Prosper. Tryouts usually happen in October, but all bowlers are accepted and placed on a team based on their skill level.

“I found out about the team when my friend and I were eating at lunch, and she saw that some clubs had tables set up for sign-ups,” sophomore Chesney Stinnett said. “We were told that it was a sign-up for the Prosper Bowling team and that we could letter as a freshman if we made varsity. We got excited and decided together to join.”

When Stinnett and her friend, sophomore Hailey Herron, signed up for the team last year, they said they found out how strong the team was.

“My favorite part about the team is the team itself,” Herron said. “Everyone was so welcoming, and they are some of my best friends. When we had practice, we would all be joking around, and we gave everyone nicknames that we call them at games to cheer them on.”

The president, vice president and secretary of the booster club are all parents of current bowlers. The current treasurer is also a former Prosper bowler.

“I love watching them compete as individuals and as a team, improving week after week,” booster club secretary and Chesney’s mom Jamie Stinnett said. “I didn’t realize how technically skilled the program can be. It’s fun to watch the kids get excited after picking up a hard spare or stringing together strikes. Our coaches are truly dedicated professionals and work with our bowlers to make them better every practice and every game.”

Some techniques and strategies the coaches use to help the bowlers improve include grip-strengthening tools. These devices help learn to guide the bowling ball’s movement, so they can control where it goes on the lane. Junior Roman Salinas said he has seen his play improve since he first joined the team.

“I’ve watched my skill grow from when I was a freshman all the way to now,” Salinas said. “The skill grew by doing just one thing at practice every week. Bowling looks like it’s easy, but there’s a lot of technique in the way you throw the ball. You have to know what your ball does because when they make it, it’s like its own science.”

In addition, team members practice throws at home on carpeting to engrave the techniques they learn at their weekly practices.

“I like being able to see the definite numbers marking my progress and growth,” Chesney said. “I also enjoy seeing the satisfaction of seeing my improvement in my scores.”

According to members, the season is over now, but students who are interested can try out for the team in October. Students who join the program can earn a letterman, learn new techniques and develop relationships.

“I love how friendly our team is with each other,” Chesney said. “There is no conflict between any of the team members and no drama. Our group dynamic is so great, and I have made some amazing friends, as well.”