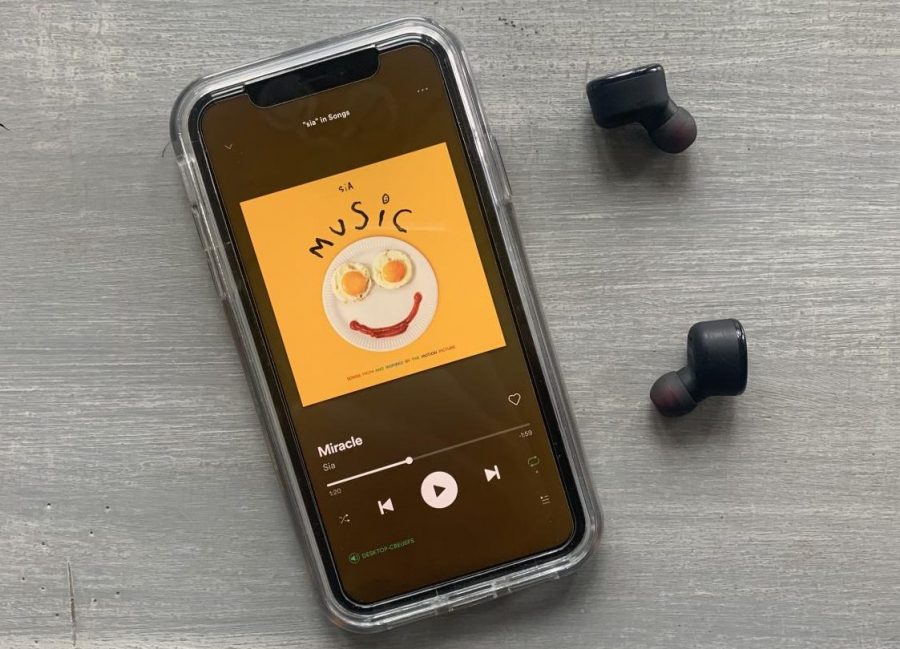 Covering pop-star Sia and her new album for her self-directed film "Music," junior Caleb Audia writes about his experience as a listener. While controversy respectively surrounds the moral and societal standard of the film, the soundtrack should not go unnoticed. "Personally one of my favorite Sia songs, 'Floating Through Space (with David Guetta)' throws the listener back to her 2016 era," Audia said. "With a reggaeton-pop stye beat thanks to the production of David Guetta, the listener has pushed away from the mind-opening and progressive lyrics and is instead focused on the radio-worthy beat."

Singer, songwriter and director Sia dropped her anticipated soundtrack and album to her controversial film “Music,” on Friday, Feb. 14. The soundtrack features 13-tracks, with songs from Sia, Maddie Ziegler, Kate Hudson and Leslie Odom Jr. who are all actors in the film. The album released Friday, Feb. 14 in the United States through streaming platforms and cinemas. Sia, who wrote all of the tracks, then released the demos into a 14-track album with features of producer David Guetta and Euphoria-singer Labrinth.

The film, which was originally expected to release in late 2016, was previously referred to as “Sister” until the debuting delay. Following the path of Music, the main character played by former “Dance Moms” contestant Maddie Ziegler, the film centers around the struggles that Music and her sober, drug-dealing sister Zu, played by actress Kate Hudson, go through to find love and happiness after the death of their grandmother. Music is also a non-verbal, autistic character, sparking controversy amongst watchers considering Ziegler is neither autistic nor non-verbal.

Against the continuous backlash that has lasted since early 2020, Sia has deleted her Twitter account during the first week of Feb. 2021 within days prior to the film, album and soundtrack release. While the movie is not covered in this review, the soundtrack takes into full consideration of the film’s background.
Track No. 1 Rating – Mood-setting

The first track of the album “Music” is a song that was released in early 2020. “Together” features an upbeat tempo with calls for unity. The lyrics “Come now set the past on fire / Stand up, put your face to the sky my love / Together, we can take it higher” ring through the catchy chorus of the lead single. Paired with its one-shot music video, Maddie Ziegler’s seemingly imperfect dancing and Sia’s catchy songwriting are key to setting the mood of the rest of the album.

“Hey Boy” starts off strong with catchy guitar strums and stabs, yet quickly transitions to the pre-chorus featuring Sia’s higher-setted tone of vocal range. The lyrics, seemingly about falling in love and having a good time, are almost passed by the listener through the strange and encompassing beat, focusing the attention away from the unique audio recording.

Previously released in mid-2020, “Saved My Life” features Sia’s lyrics, much like her previous-hit “Chandelier,” about her nearly-fatal overdose in 2010. There was a purpose to keeping the song, and as a result, comparatively hints at the similarities of First Responders amongst the COVID-19 virus and the professionalism and compassion shown around her near-death experience. “In your loving arms, I’ll be alright / Someone must have sent to here tonight / Someone must have sent you here to save my life” Sia belts of the simplified drum and piano-filled music.

Track No. 4 Rating – Should’ve Been a Hit

Personally one of my favorite Sia songs, “Floating Through Space (with David Guetta)” throws the listener back to her 2016 era. With a reggaeton-pop style beat thanks to the production of David Guetta, the listener is pushed away from the mind-opening and progressive lyrics and is instead focused on the radio-worthy beat. “So today baby remember you’re okay / We’re all floating through space,” Sia sings.

The No. 5 track “Eye to Eye” features a synth-obsessed instrumental background with under-achieved lyrics and vocal production. While it’s a good break from the amazingly-filled tracks before this one, it’s underwhelming in terms of enjoyment. “You need a little bit of love tonight / And baby I got it,” is seemingly simple lyrics that Sia writes over the 80s themed track.

“Music,” also the title of the album and film, is a slow-tempo track with meaningful purpose and emotional connection to the film. “I won’t let you down / We’re together now / Music, I’ll be on retreat / Come now, you’ll be safe with me,” Sia writes over the choir-filled background. Something the listener may notice throughout the progression of the track, Sia’s vocal range increases within each section, ending with an undeniable source of talent.

“Courage to Change” is already considered the best song on this album by the majority of fans, emphasizing the deep, meaningful and relevant lyrics. “Have I the courage to change today? / You’re not alone in all this / You’re not alone I promise / Standing together we can do anything,” Sia belts over the alive and upbeat production with signature drums, pianos and bells found in previous Sia tracks like “Alive” from 2015. “I want to leave you better / I want my life to matter / I’m afraid I have no purpose here,” Sia writes over the fourth verse. The chorus, which was previously featured in Pink’s latest album, was co-written by the two pop-stars.

Track No. 9 Rating – Throw-back
Sounding like Sia’s previous 2000s tracks, “Play Dumb” features hip hop beats with fast-paced and repetitive lyrics, with vintage synth and bass sounds. “I’m moving on because I love myself too much / To play this dumb,” sings Sia through the chorus.

“My last penny never left me / Thought I had died and ended up in hell / But the heat brings relief / Beautiful things can happen anywhere,” Sia screams in the chorus. “Beautiful Things Can Happen” is another fan favorite as the vocal power of Sia’s range is progressed as the song continues. Filled with a plethora of vocal cracks, another thing Sia is known for, the song never gets old and can conform to any mood.

Track No. 11, “Lie to Me,” starts off with fast violin strings. “Say anything / Say anything to keep me from feeling / Tell me lies,” Sias lyricism builds up to the chorus. With a fast-paced tempo and meaningful lyrics, the song underperformed its expectations. Unfortunately, it seems as if the two pieces don’t fit well together, but still a worthy track to listen to.

The title “Oblivion” was previously seen years ago on Labrinth’s album “Imagination of the Misfit Kid,” featuring Sia. Yet this time, Sia reverses the roles to feature Labrinth in her album “Music.” Sia and Labrinth swap verses, giving a different taste and feel to their raw emotions and changing styles. “So why do I keep myself locked in, yeah / I wanna be / Be an Oblivion / I don’t wanna live like this / I need someone to knock me out,” Sia and Labrinth conjoin over the chorus.

Beautiful vocal hums and catchy, relatable lyrics are all that’s needed to explain Track No. 13 “Miracle.” “I don’t wanna quit / Before the Miracle,” Sia sings and hums throughout the tropical, yet joyous song. Perfect for reading, studying, driving or any activity, “Miracle” is great for background music and deserves to be recognized.

The last track, which is also a bonus track is “Hey Boy (feat. Burna Boy).” Previously released in Jan. 2021, the track was also featured with an animated music video and live performances. “Hey boy won’t you come, come around town hey boy / Hey boy better run, better run now, I said hey boy,” Sia sings over the groovy and tropical-based chorus.
Full Album Rating – Unexpected Beauty
While the controversy that surrounded the film could damage the reviews of the album and soundtrack, this piece deserves credible recognition. The backing vocals and emotion shown through the majority of the songs compel the listener to be drawn into the film, as a curiosity for the history behind each track is expressed. This was one of the best soundtracks and albums I have listened to, accurately following a distinct theme and setting with raw and emotional vocals, lyrics and production. Sia has a lot more to offer in the upcoming months, and fans have a lot to look forward to.

Column: How pop-star Sia could recover from upcoming film controversy