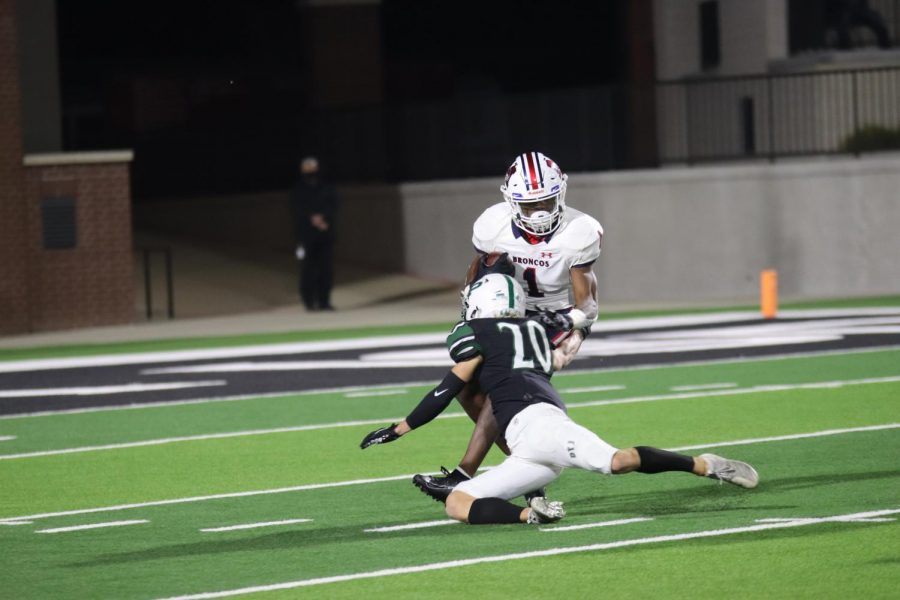 Diving into a McKinney player, senior James Duvall makes a tackle. In the state of Texas, the Eagles are ranked No. 59. Prosper will play Marcus in the playoffs Dec. 12. Kickoff will be at noon at Flower Mound's Neil E. Wilson Stadium.

Going 5-3 this regular season, and 3-3 in the district, the Eagles football team fought their way to the playoffs. The team has prepared to face off against undefeated Flower Mound Marcus Saturday, Dec. 12 at 12 p.m. at Flower Mound’s Wilson Stadium. With COVID-19 setbacks, key players and challenging opponents, this season stands as one to remember.

One key player this season has proved to be quarterback and senior Jackson Berry. He was named offensive player of the week by SportsDayHS on Twitter after his performance against McKinney Boyd on Dec. 4. His showing in that game made him a Prosper Eagles Football all-time yardage leader, and he also tied the all-time record for total touchdowns.

Another key player is middle-linebacker and senior Aidan Siano on defense. Siano had a mid-season ankle injury, but that did not stop him from having what he said feels like his “best season.” Against Guyer High School Oct. 30, Siano had 23 tackles, eight tackles for losses and two sacks, which was a key factor in the close score of the game, 24-23.

Against McKinney High School, outside linebacker and senior Alex Stowers was an important player that contributed to the 27-17 win for Prosper. Stowers had 15 tackles and two sacks and a fumble recovery.

Although these games proved their strengths, they also had challenging opponents. Denton Guyer High School, Denton Braswell High School, and Allen High School all gave the Eagles a run for their money. Prosper lost to Braswell by 17 points, 41-24. Against Allen and Guyer, Prosper lost by a margin fewer than four points. The team said that with the exception of Braswell, these games were lost due to specific plays.

Looking ahead to the first round of the playoffs, the Prosper Eagles are expected to win against Marcus Marauders by a few points, according to Joseph Hoyt on the Dallas Morning News.