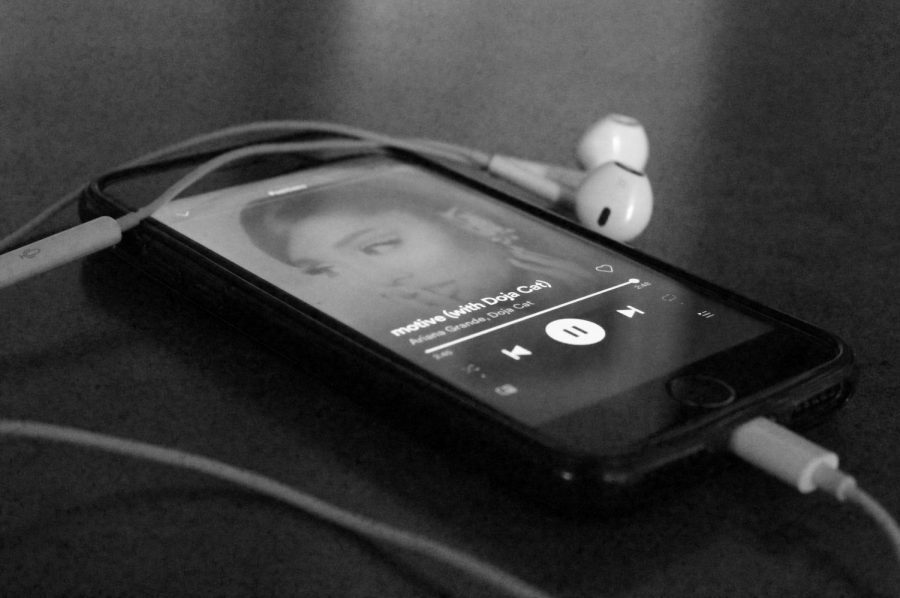 While sitting in class, reviewer and junior Alyssa Clark listens to the latest Ariana Grande album, "Positions." The album dropped on Oct. 30 with production from multiple people under Republic Records. "After years of being publicly scrutinized and watched over, Grande takes control of the narrative behind her relationships and puts it all into this album," Clark said. "Her vulnerability and true feelings are key points that make this album so unique and special, and truly unlike anything else she has released in the past, which is really beautiful."

With the release of her sixth studio album with Republic Records, “Positions,” Ariana Grande has continued to excite fans and keep them listening. News of the album’s release spread through social media excited fans Oct. 21. The album features special artists such as Doja Cat, the Weeknd, and Ty Dolla $ign. A variety of producers helped Grande on the album, including Tommy Brown, Anthony M. Jones, London on da Track, Murda Beatz, The Rascals, Scott Storch, Shea Taylor and Charles Anderson.

The album features strong, melodic lyrics that Grande’s voice amplifies, which is supported by quick and catchy beats and electronic tones that constantly elevate each song. After years of being publicly scrutinized and watched over, Grande takes control of the narrative behind her relationships and puts it all into this album. Her vulnerability and true feelings are key points that make this album so unique and special, and truly unlike anything else she has released in the past, which is really beautiful.

“shut up”
The first song on the album was also the first song Grande wrote for it. A slower pace, the melancholy tone of the beginning changes once the vocals and violin beat really kick in. The overall vibe and tone of the lyrics tells people to stay out of her business and stop talking about her, telling them to shut up and “you sound so dumb” because everyone that talks or criticizes her, like the media, doesn’t truly knows her. The instrumental outro was the perfect finishing touch as the song ended.

“34+35”
The second song, filled with fast verses with beautiful background melodies, talks all about Grande’s intimate relationship with her significant other, and the actual title is a play on the name of the album. The snappy dance beat that is heard throughout the whole song makes it impossible to not feel happy and dance when listening to this song.

,
“motive (with Doja Cat)”
With a robotic voice to start off this track, the energetic vibes and attention-grabbing music start from the second the song begins. The dance beat in this song gives off such an upbeat energy, and supports Grande and Doja Cat’s voices so well. This third song and first collaboration of the album was teased in May, and then again in September.

“just like magic”
A favorite off the album, the otherworldly intro with futuristic sounds and lovely vocals grabs the listener’s attention immediately. This song can be considered a reminder of her older song, “NASA,” from her fifth studio album “thank u, next” which came out two years ago at the end of 2018. All about working on herself and living her best life, Grande talks about how she gets the vibes and life she wants “just like magic” because “I get everything I want ‘cause I attract it.”

“off the table (with The Weeknd)”
The second collaboration of the album is all about giving a relationship another shot after it failed the first time, because nothing is “off the table” for them. The entire song comes from the perspectives of both people involved in the relationship with Grande and The Weeknd beautifully telling the story throughout the verses and chorus. This is the second collaboration between the two artists, the first coming from 2014 with their chart-topping single “Love Me Harder.” Toward the end of the song, Grande’s vocals shine as she belts to the lyrical violins, and the whole song is a true story that ends with soft perfection.

“six thirty”
Again, Grande shows off her beautiful falsetto voice in the sixth song off the album. The rap-style beat compliments her lyrical voice in the second half of the chorus when she asks her potential lover “are you down?” while she thinks about them and what they could have in the future if her lover is ready.

“safety net (feat. Ty Dolla $ign)”
The seventh track is all about falling for someone without knowing how it’s going to go. The first collaboration between the two artists, Ty Dolla $ign called the song “a melodic and amazing tune” in an interview.

“my hair”
On the eighth track, Grande brings in a background track that seemingly resembles a more 60s-70s tune, tying in a variety of whistle notes throughout the song. Grande’s sweet, embracingly open tone here compliments her lyrics, as she sings of letting her hair down with her lover.

“nasty”
With the sweet, retro-sounding intro, it creates a tone similar to one of Grande’s first songs, “The Way.” The eleventh track of her album, “nasty” features delightful, sensible lyrics, which compliment Grande’s soft, but yet powerful, voice. As in the other tracks, Grande once more sings of her lover and wanting to be with them, saying “I just want to make time for you.” This song is catchy and overall very harmonious and peaceful sounding.

“west side”
The tenth track, “west side,” features a content, peaceful chorus and intro to the song. Grande sings of wanting to be with her lover, saying, “Just let me be in your life like that.” The soft lyrics combined with Grande’s lyrical voice make for a great song overall.

“love language”
Another favorite, the overall sound of this song is unlike anything else Grande has put out before. With the swinging sound of a string quartet in the background of the chorus that reminds the listener of a mix of modern day pop and hip hop with lyrical aspects of an older time period, like the 20s. This song is uniquely beautiful, and was a nice change of pace that is surprising. The complete sound change at the end is another amazing surprise, where the strings are replaced by futuristic tones and layers of Grande’s vocals.

“positions”
Arguably the best song from the album, this title track covers Grande’s love for her significant other where she wants to show her love through flexibility and work, and she praises her s/o as they’re “too good to be true.” The soft, swing background music reminds listeners of a lyrical song, and violins can be heard throughout multiple parts of the song. But, the techno beats with special snaps and bells from a tambourine gives off vibes from a rap song. This single dropped on Oct. 23, a week before the release, and presented a music video with it, where fans immediately took to social media to point out the similarities of Grande’s look to former First Lady Jackie Kennedy.

“obvious”
The soft beginning combined with the positive beat and angelic background vocals truly makes this song sound like a dream. While she talks about how she wants to love her lover with no boundaries, she knows how blatant and apparent it is.

“pov”
The beautiful piano intro with Grande’s falsetto but powerful voice sounds so different from the rest of the album, and it’s the perfect bow-on-top of an amazing collection of music that Grande brought with this album. In the 14th and last song of the album, she wishes she could see herself from the way her lover does because they love her for who she really is, and she wants to love herself the same way. The song builds into a beautiful symphony of strings, vocals, and a catchy beat, and ends the same way it began.