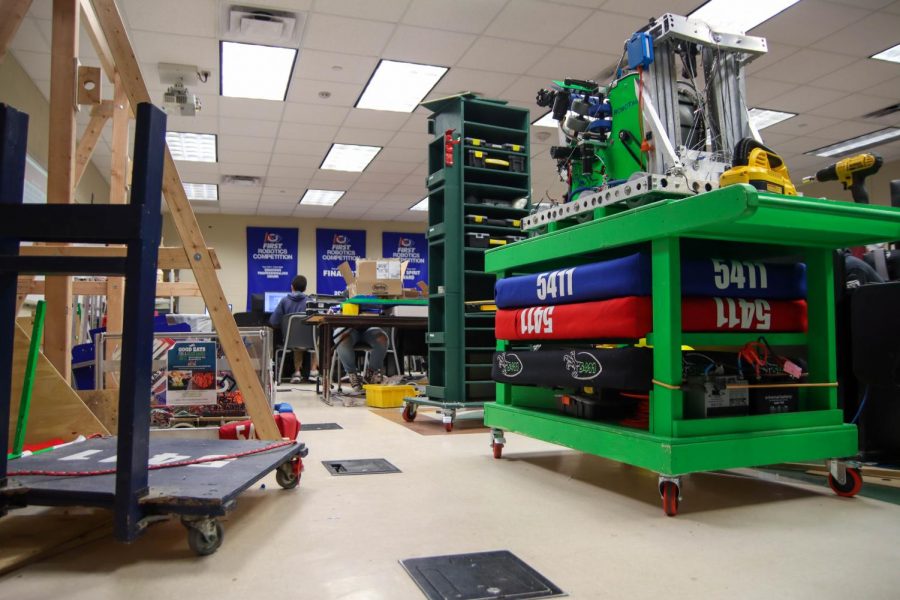 The robotics room is used to fix robots and prepare them for competitions. "Even if you're spending all that time making your robot, once you get there it really shows how well you’ve actually done and how much effort you have put in," team member John Wood said. "You see that will how well your robot operates on the field." The robotics team will compete at the regional competition in Dallas on Mar. 19.

The robotics team will compete at the Robotics Regional competition on March 19 – 21 in Dallas.

This past weekend the robotics team competed in the UIL Robotics District Competition. This was the first of four events of the year. The theme of the event was “Star Wars.” Each team competed in events and tried to earn points based on every completed action.

“This year we had to shoot a ball into a hexagon that was 8 feet in the air and then hang from a swinging bar, and there was a wheel that you could spin,” team member Ryland Mosley said. “You would get points by scoring balls and hanging or spinning the colorful wheel.”

During the competition, the team’s main goal is to work with other schools, but also on their own team, and complete tasks using their robots to earn points. The team with the most points in the end wins.

“The purpose of the event is to build a robot that can shoot ‘power cells’ or medium-sized balls into a ‘powerport’ (a large hexagon) to get points,” team member John Wood said.

The robotics teams spend about 30 hours a week together.

“We really are a family,” Green said.  “We spend seven days a week together, five hours a day, more on the weekends.”

Wood said his favorite part about competitions isn’t the robots, but the people he gets to compete alongside.

“My favorite part, it’s not even the robots,” Wood said. “It’s the experience you get with the other people who you go to competition with.” 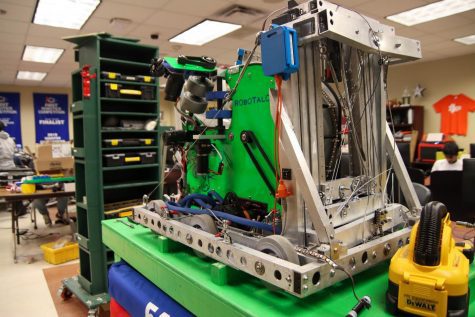 Karla HernandezA robot sits atop a table in the robotics room. The robots created by the robotics team are programmed to shoot objects and hang from bars. “The purpose of the event is to build a robot that can shoot power cells or medium sized balls into a powerport to get points,” Wood said.

The team is now preparing to compete at the regional competition in Dallas. They are fixing up their robot by repairing some broken pieces and the shooter.

“What we’re doing right now is fixing the robot because near the end of district, our lift broke , but all we have to do is just fix that (and) fix our shooter,” Wood said. “Certain times the balls would jam up, and we wouldn’t be able to shoot for the rest of the game which lost us a lot of points.”

The team’s regional performance will determine if the robotics team will advance further. They will travel to Dallas to compete.