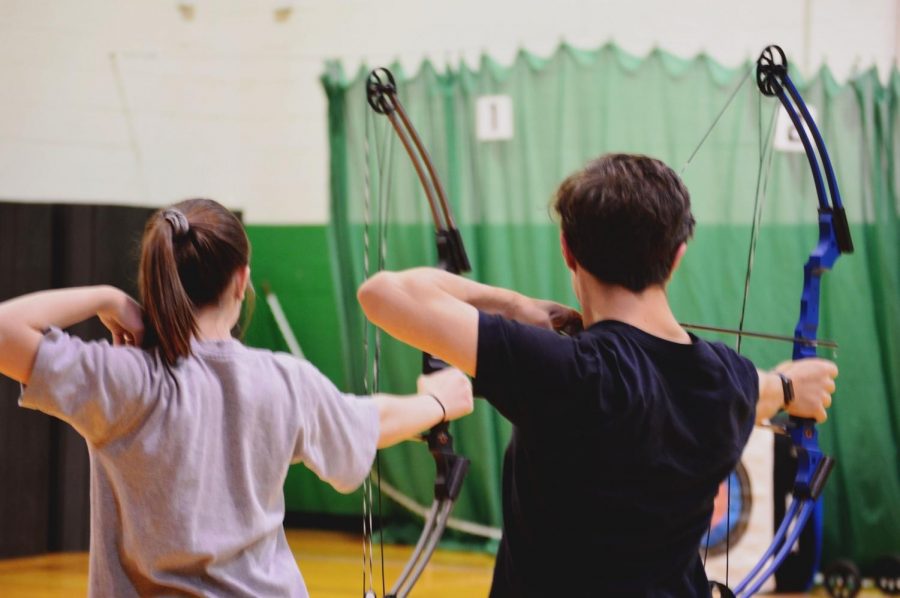 Sophomore Jessica Hampton and Freshman Sean Rich, set up their shots and aim for their targets. Both archery teams practice two nights a week in preparation for upcoming tournaments. "I like how it is a sport anyone can do," Hampton said.

A student loads an arrow into the bow, setting up a shot with the target – approximately 15 meters away. Intense focus and calculation appear on the teenager’s face. As his teammates voice the words, “follow through and reflect,” junior Ethan Doucet releases the string and achieves bulls-eye.

For four years now, Coach Becky Hedge has led Prosper’s archery club to success. From as early as elementary school all the way to high school, students within the district have honed their skills as archers. Students practice as a team but perform individually in tournaments, applying their skills to come out on top.

Coach Hedge, or Coach Becky, as her students call her, is to thank for the foundation of the school’s archery club. Prior to her inclusion as a member of the isd, there was no such club for kids to join. Hedge took it upon herself to share her passion with the rest of the school district, giving students who may have never otherwise experienced archery a chance to test their skills.

“My family and I moved here from Kentucky,” Hedge said. “My son shot archery when we were in Kentucky and there wasn’t an archery program when we moved here to Prosper. So, I worked very diligently with Prosper ISD to start the program. I became a  certified coach and we’re in our fourth year now.”

Archery is a sport that often flies under the radar, despite its unique qualities. Rather than using a ball or relying on your own body for running or swimming, archery requires the use of a bow and arrow. Archery is also an individual team sport, meaning an individual player has only one opponent rather than an entire team.

“Our season is just what it sounds like, shooting archery,” Hedge said. “We teach all of our students the safety aspects first, and then we teach them how to go through a competition which is shooting arrows at a target indoors.”

Students looking for a fun and unique team-building experience will find exactly that in archery.

“Oh my goodness, there’s so many reasons why people would enjoy archery,” Hedge said. “First of all, I don’t think you could get much cooler than shooting a bow and arrow.”

Archery also provides a mental challenge as it dwells in the realm of math and science while simultaneously requiring physical strength from its players. A part of what makes student archers so adept is their ability to calculate their shots under stress.

“It takes a lot more mental effort and physical effort than it looks,” Hedge said. “There’s a lot of math and science involved, so kids who are naturally good at math and science will typically excel in this.”

Archers learn through the club how to maintain a sturdy mentality. They have to be able to remain focused and calm, even if they make a bad shot. Likewise, they cannot let their score affect their state of mind as they play. Students must simply keep a cool head and continue shooting. Sophomore Jessica Hampton acknowledges how an archer’s mentality can affect their gameplay.

“Whenever you are shooting…(your mentality) kind of shows off,” Hampton said. “Like if you get upset over one arrow, it will get worse and worse after that.”

Students in archery are also given the chance to travel within the state.  The archery team has gone to nationals all four years it has been around for, meaning the team often travels across the country as well. Coach Hedge and her team said that they plan to continue their success in the future.

“(Students) should know that we do have a lot of fun throughout the season,” Hedge said. “We travel a lot throughout the state and the nation because we usually go to the national archery tournament. I don’t think I’ve ever been involved with a sport that’s had this much fun so that’s what they should expect.”

Archery season starts in August and lasts for most of the school year, meaning students will have to be committed to succeed. Students interested in joining can email Coach Hedge or sign up to talk to their counselor at any time to help them get started. Archery is one of the many opportunities offered by the school that allows students to display their hidden potential.

“We always use the phrase ‘challenge what’s possible,'” Hedge said. “We want our kids to believe that they can achieve whatever they set as their goal.”