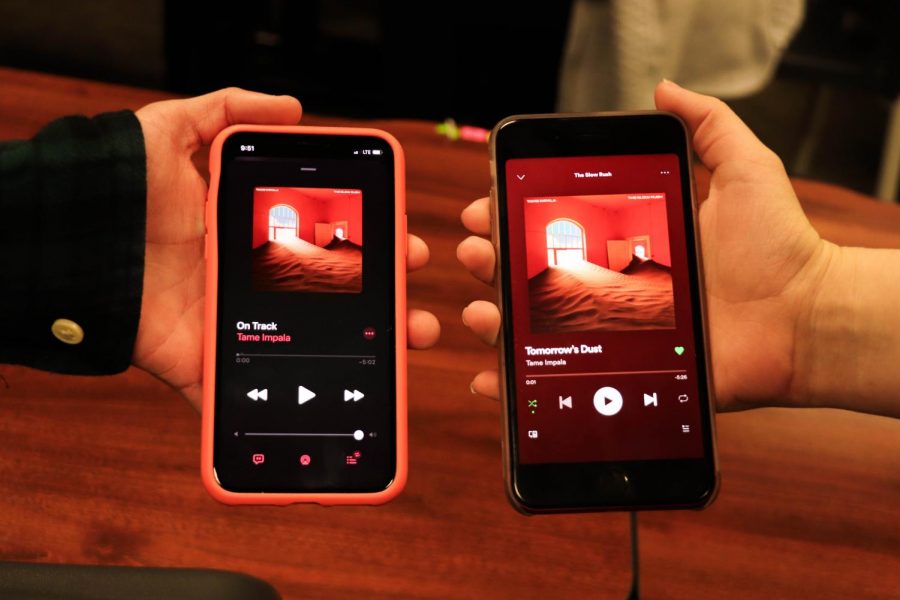 Tame Impala’s frontman Kevin Parker released the band’s fourth album, The Slow Rush, Feb. 14. Even though the band travels with multiple members while on tour, Parker writes, records and produces all of the music.
Two opinions, one album
Entertainment Editor Katie Johnson and Assistant Editor Ryan Stanley both offer their opinions on the album.

Ryan’s Take: New, bold, fresh. Each Tame Impala album has offered fans something new. InnerSpeaker was a playground of creation that embodied Parker’s adolescent sound. Lonerism was the peak of his psych-rock sound, and Currents transitioned to a pop-rock fusion unheard of before. However different, all three albums had a similar theme: insecurity about the future, lots of unanswered questions and a perfectionist sound that ties it all together. But with The Slow Rush, Parker finally sounds sure of himself and his future – no doubt inspired by his recent marriage to his girlfriend. The album reaffirms Tame Impala’s production style: no album is the same. Instead of a “formula” for his music, Parker has personality in each song.

Katie’s Take: A synth-filled fever dream. Kevin Parker did what he’s known best for, once again. The Slow Rush is the perfect trippy medley chock-full of a wide variety of emotions. Parker let his emotions take control of each song and set the pace of the album, with some songs clocking in at seven minutes. The Slow Rush is definitely a worthwhile listen because no other artist does anything quite like Parker.
One More Year
Ryan: While it doesn’t top Currents intro song Let It Happen, One More Year is a breath of fresh air for Kevin Parker and fans. The background is indescribable – a sound unheard of before. Combined with upbeat drums and optimistic lyrics about the future, Parker sets up his most personal album to date.

Katie: One More Year is such an interesting first track. It’s a perfect album-starting song and takes the listener inside the mind of Kevin Parker. It definitely sets a vision for the album, and the trippy beat with synth makes for a bold kickstart into the album.
Instant Destiny
Ryan: This song is for those who are helplessly in love. With no worries and filled with plans, Parker seems ready to start a life with his newly-wed wife. With a quick intro that pulls you in, the song places fans in a dream-like state and ready to face anything coming their way.

Katie: The transition into Instant Destiny is so smooth yet so jarring from the previous song because of how different they are from each other. It perks your ears up in the best way. The intense synth beats draw the listener in immediately and is such a mood-lifting song. It makes you want to get up and conquer the world and dance while you do so. Instant Destiny is most definitely a song for blasting while you’re driving on a country road, windows rolled down.
Borderline
Ryan: With a beat, lyrics and sound that pull you in, Borderline is one of the catchiest songs on the album. This is the kind of jam that has made Kevin Parker famous. From pop, rock, to hip-hop lovers, this is a hit for everyone.

Katie: The array of psychedelic melodies intertwined with a catchy beat of synth, bass and flute definitely make Borderline one of the best songs on the album. As Ryan said, Borderline definitely is one of the catchiest songs on the album. Borderline was the first single released from The Slow Rush and for good reason. The catchy melodies make this an easy-listening song and definitely have the very distinct “Tame Impala sound” Parker is known so well for.
Posthumous Forgiveness
Ryan: Possibly Tame Impala’s most personal track to date, Posthumous Forgiveness recalls Parker’s relationship with his father and the realizations that came after his death. The first four minutes feature almost anger-filled lyrics with blown-out drums and guitar. But with the last two minutes, the song takes on a reminiscent and longing for the past mood that makes you feel Parker’s pain. While it’s not a bumping hit, I respect the song for its deeply personal revelations. And it’s not a Tame Impala album without at least one song longer than six minutes (the album has three) with Posthumous Forgiveness clocking in at six minutes and six seconds.

Katie: Slowing the album down, Posthumous Forgiveness is a blissful six minutes of tortured, painful lyrics. You can hear the pain in Parker’s voice throughout the duration of the song. The pulsing drums add to Parker’s intense emotion of anger, and possibly regret, felt throughout the song before fading into him softly reminiscing on the relationship with his father.
Breathe Deeper
Ryan: One of my favorite songs on the album, Breathe Deeper has a catchy chorus worthy enough to sing along to. Staying true to Tame Impala’s psychedelic roots, the last minute dives into a trippy synths. Even though Parker’s sound has changed, his style has not.

Katie: Breathe Deeper switches up into a more upbeat track with gorgeous vocals mixed with synth, drums and a complimentary piano riff. The way the music melds together is an indescribable sensation. It’s fresh, different and definitely one of the reasons Parker is so successful. Everything about Breathe Deeper works in such a way that Parker is known for doing. After a short pause, you’re immediately reeled back in enticing synth which progresses to the end and perks your attention from the get-go.
Tomorrow’s Dust
Ryan: Instead of a guitar sound with multiple effects/pedals as Parker used in albums such as Lonerism, Tomorrow’s Dust has a more crisp and clean chord progression that pairs with his voice. When I listen to previous albums, Parker’s lyrics are sometimes hard to hear because of distortion effects, but on The Slow Rush, his voice rings out. The last 30 seconds of Tomorrow’s Dust are strange, but that’s expected with any Tame Impala album.

Katie: Starting out, there’s a short vocal riff which reminds me of elevator music, before transitioning into a catchy drum beat and acoustic guitar, Tomorrow’s Dust yet again switches up the vibe of The Slow Rush in just the right way. The chorus of the song is such a blissful and different sensation from anything I’ve ever heard before. Parker is brilliant, and showcases his uniqueness during this song. The electric guitar riff blended with piano and synth during the chorus mixed with foward-thinking lyrics is a fresh and almost post-modern take on love songs. The song itself is almost electric in how it progresses.
On Track
Ryan: My favorite song on the album, On Track will wash away all of your worries and replace them with flowing optimism. The slow buildup sets up an explosion of lyrical and synth perfection. In the first chorus, Parker mentions a “minor setback” compared to the end chorus where it switches to a “major setback.” But that doesn’t stop Parker from continuing with his ‘on track’ message, and I love him for that. The hopefulness is refreshing, and the message is uplifting.

Katie: On Track slows the album back down with its piano and organ lead mixed with Parker’s vocals. The explosive drums truly make this song a rollercoaster of emotion. This song will help you forget troubles and be optimistic about the future, which is exactly the song everyone needs going into 2020. It’s a reassuring anthem for continuing onward in life and for what the future holds. Once again, Parker is absolutely brilliant.
Lost In Yesterday
Ryan: A track straight out of the 80s because of its groovy beat and dance-hall tempo, Lost In Yesterday is a great song with an even better music video. For those stuck in the past, turn this song on, and if you want to know the deeper meaning behind the lyrics, pay attention to the details in the video.

Katie: The bass riff draws you in right away and transports you into a different time period. It definitely has influence from some early alternative groups in the 1980s such as Depeche Mode, The Smiths and The Cure, while still maintaining complete originality. Lost in Yesterday is bold and like nothing similar to today’s era of music.
Is It True
Ryan: When I first listened to Is It True, the intro felt too crowded and loud. However, the song has grown on me – as a lot of Tame Impala songs do. The chorus is catchy and the synth-driven beat is nightclub worthy thanks to its face-paced beat.

Katie: With catchy lyrics and an upbeat plethora of bass, synth and drums, Is It True is a bright song perfect for easy listening. The experimental guitar riffs make it a very distinctive and unique take. The abrupt transition into a softer sound also adds to the uniqueness. Parker has a vision for the album and knows exactly what to do in order to make it a masterpiece.
It Might Be Time
Ryan: My least favorite song on the album. The blown-out drums are too much for me, and the lyrics lack progression seen on other Tame Impala tracks. The idea behind the song is good as Parker comes to terms with his anxiety that he’s “going under.” Overall, it felt repetitive – but maybe that’s the point. Parker telling himself “to face it” could be his constant reminder to face his future.

Katie: The jumpy synth at the beginning makes for another interesting transition into It Might Be Time. It’s definitely more on the experimental side, but Parker makes it work. The drums and bass add another dimension into the song and help carry the melodies. The lyrics are extremely relatable to high school students, especially as we approach graduation in May. The lyrics talk about moving on and growing up while being caught up in a dream. The repeated lines of ‘it might be time to face it’ could be taken as facing fears or facing the harsh realities of growing up.
Glimmer
Ryan: Similar to ‘Nangs’ on Currents, Glimmer repeats the same phrase over and over, but instead of questioning if “there’s something more than that” as Parker did on Nangs, he “might just find it after all” – following a theme of hopeful thoughts seen on The Slow Rush. The intro, which Parker said is taken from a podcast, creates a humorous beginning and is one of the first times I’ve heard him call out other artists/songs.

Katie: The vocals at the beginning seem to make a jab at artists who ‘crank’ the bass up to make their song sound better. The loopy synth and drums make for a beautiful progression into the chorus. Parker just repeats “I just want a glimmer of hope” over and over again.
One More Hour
Ryan: I love this song for everything it is. The lyrics, beat and meaning scream Parker’s perfectionist mentality. The Slow Rush starts with One More Year and ends with One More Hour, which puts a nice full-circle touch to the album. Parker seems to ask for one more hour with himself before he commits to his future. But his mood is not pessimistic as he finally is sure of who he is and what he wants. The sun is setting and Tame Impala is riding off into it with One More Hour.

Katie: Immediately the vocals and cymbal caught my attention. Combined with the intense build-up of drums and bass, One More Hour is the perfect song to end The Slow Rush on. Everything about it is absolutely brilliant and showcases Parker’s talent. While it is the longest song on the album, it is most definitely for good reason.