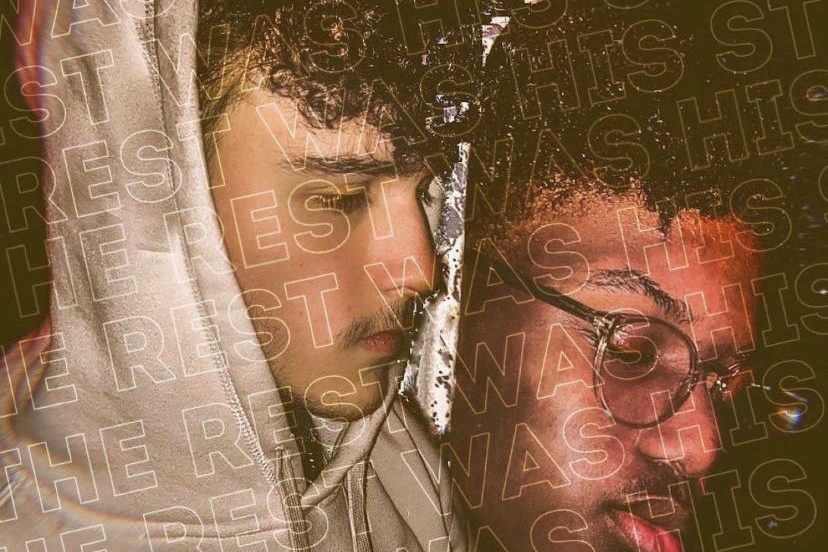 Seniors Camron Silva and Goel Yongo take a spotlight position on the cover of their upcoming album, "The Rest Was His Story." No release date has been confirmed for the new album. Their most recent album, "MOOD$," came out in October 2019. “I definitely don’t think it’s just a high school project,” Yongo said. “Seeing how far we’ve come in these three years, it’s at a point where we can’t stop now."

Music. It’s the remedy for broken hearts, the sunlight for growing minds, the best friend who has another’s back, and, according to seniors Camron Silva and Goel Yongo, the one thing that knows exactly how listeners feel. For this pair of high schoolers, music isn’t just lyrics and a beat — it’s part of the soul.

Silva and Yongo began their collaborative journey into music production in November 2017 when they formed MFY$, or Music For Your Soul. Originally just two friends with some music software and a dream, Silva and Yongo combined their talents and started creating songs to share on the music streaming services SoundCloud and Spotify. The two have produced music ever since, and their latest album “MOOD$,” released in October 2019. The two have another album, “The Rest Was His Story,” in the works, but no release date has been confirmed for the new project yet.

“For me, I started producing music first because I saw this Youtube video that inspired me,” Silva said. “Basically, this guy’s entire Youtube channel was dedicated to recreating popular songs from scratch. I saw that, and I just knew I wanted to do it.”

Silva began creating original beats on his laptop, using the software “Logic,” and wanted to take his music to the next level.

“After I started making beats, I hit up Goel because I remember one time when I was playing the piano, he started singing to what I was playing,” Silva said. “And then, I was just sitting there over the summer, and I was like, ‘I need a good voice on the beats I’m making.’ I hit him up, and eventually, everything fell into place.”

Every track strives to give listeners something unique that they’ve never heard before, all while telling a story of life, love, hardship and self-worth. Silva and Goel’s songs not only provide a positive message for their audiences but also work as an outlet for their own emotions.

“It’s taught me that I could reach out to more people than I thought,” Yongo said. “It doesn’t only help others, but it helps myself, as well. Reflecting on a darker time, it helps actually speaking out about it, and it’s cool that other people can relate as well.”

The music industry includes those who don’t favor every song, but the duo said they aren’t concerned with opinions as much as they used to be.

“At first it was kind of scary releasing music and worrying about what other people thought,” Silva said. “But the more we’ve released, the less I’ve worried about that. At the end of the day, there’s going to be someone who doesn’t like it.”

Other student musicians have collaborated with Silva and Yongo on beat-making and behind-the-scenes production, including senior Ben Willett.

“I mean I kind of thought of Camron as a rival producer at first,” Willett said. “Then, he asked if I was down to collab, and I said yes, and it just took off from there.”

Willett has collaborated with multiple rising music groups in Prosper, but he said he focuses on keeping his rhythm original and connecting with all kinds of listeners.

As their senior year comes to a close, Silva and Yongo don’t plan on ending their music career anytime soon, and they hope to take their music beyond high school.

“I definitely don’t think it’s just a high school project,” Yongo said. “Seeing how far we’ve come in these three years, it’s at a point where we can’t stop now. We see where we could be, and it would honestly be a shame if we stop now. It would be robbing us of a great future.”